PETA Fundraises Big Bucks On Stopping Cruel Primate Testing, But Hasn’t Had a Win in Years

The deceptively named People for the Ethical Treatment of Animals have been raising money on promises of stopping cruel laboratory testing conducted on primates for ages, even though they haven’t had a win in that area for six years.

Now, the organization has a major egg on their face as the US is not only refusing to stop, but is boosting funding for research monkeys in the wake of COVID.

PETA’s last win regarding tests on primates was all the way back in 2015, when an expose on the National Institutes of Health ended more than 50 years of infant-monkey maternal-separation studies.

Currently, the US government is buying up monkeys for animal testing in record numbers to offset an ongoing shortage of these animals after so many were used in experiments testing COVID-19 vaccines. Unfortunately, PETA sure as heck isn’t stopping them — as they are apparently too busy targeting exotic animal owners.

“To make room for more monkeys, the US National Institutes of Health (NIH) has invested about US$29 million over the past two years in refurbishing housing, building outdoor enclosures and making other infrastructure improvements at the US National Primate Research Centers (NPRCs), which it funds. The agency is expecting to spend another $7.5 million or so by October. And US President Joe Biden’s administration has proposed investing even more: citing the pandemic, it suggests a 27% increase in funding for the NPRCs in its budget request for fiscal year 2022. If approved by Congress, that would add $30 million for the centres,” Nature.com reported last month.

The NIH is making excuses for purchasing the primates by saying that they need to be prepared in case there is another pandemic three years from now.

“We have been making investments to bring the levels up and to plan for the future,” James Anderson, director of the NIH Division of Program Coordination, Planning, and Strategic Initiatives in Bethesda, Maryland told Nature.com. “What happens if [a pandemic] happens again, with another virus in three years? We want to be ready for that.”

Despite PETA having exactly zero wins on the monkey vivisection front since 2015, perhaps because they are distracted with killing animals that are dropped off at their Virginia shelter, they are using the plight of these poor primates for fundraising.

When you sign any primate-testing related petition, or use their form to send a letter complaining to a relevant party, the website immediately prompts you to give them money on the seemingly false premise that donating will help end the practice. 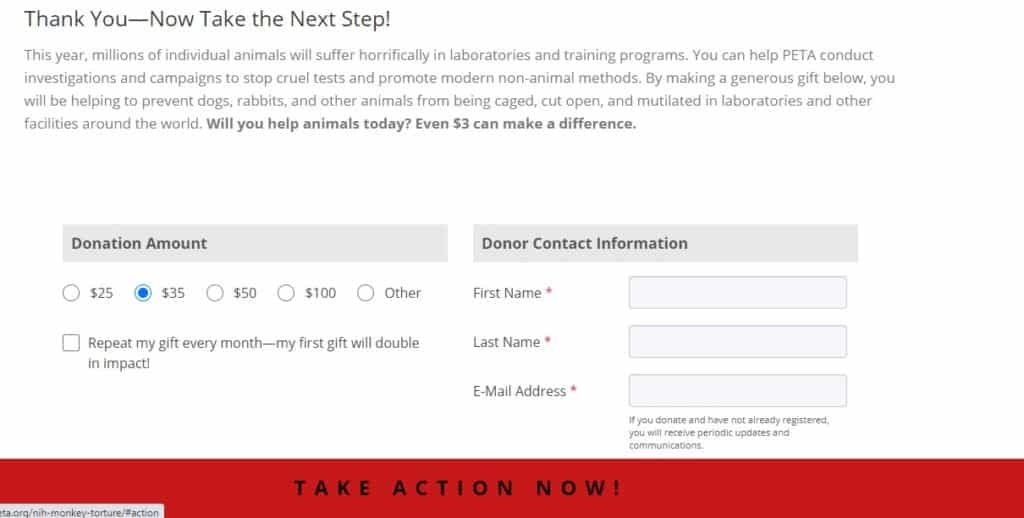 On Friday, it was also revealed that PETA received $2.6 million from the taxpayer funded COVID Paycheck Protection Program (PPP) — and nearly $2 million of that loan was forgiven in June.

PETA’s total revenue in 2020 was $66,277,867, according to financial records posted on their website — hardly making them one of the small businesses that these loans were intended for.

PPP loans over $2 million were being audited and borrowers were asked to justify the reasons that they needed so much. Interestingly, in late July 2020, PETA partially paid back their loan, which brought the total of their loan to just under $2 million.