An effort to move illegal immigrants from overextended border communities will be expanded by Arizona’s new governor.

Former Governor Doug Ducey joined other Republican state leaders in busing people who had illegally entered the United States via the Southern border to major cities across the country, including New York City, Philadelphia, Washington DC, and Chicago.

Governor Katie Hobbs confirmed she will keep the busing efforting in place.

“It’s something that provides support to those local communities,” Hobbs said while speaking with reporters on Jan. 20. “If we’re spending money to bus people, why not just get them to their final destination?”

Hobbs’s administration will make some notable changes to the initiative. State Press Secretary Josselyn Berry will prioritize “more cost effective” travel options over solely bus trips. The government will offer the travel option to illegal immigrants so that they can reach cities they “actually need to go to” and connect with “their sponsors,” per AZ Central.

Under the renewal agreement signed by Hobbs on Jan. 13, the state will pay for charter flights in addition to buses.

“In the agreement, AMI can provide transportation via a 737 aircraft to a designated location approved by the Arizona Department of Emergency and Military Affairs,” reports AZ Family. “The plane would support up to 150 immigrants plus support staff and the vendor should have the ability to charter one flight per month if requested by AZDEMA. Immigrants on the planned flight would be provided with ‘at least one meal.’”

The cost of the endeavor was not discussed.

The busing initiative began in 2022 to draw attention to the illegal immigration crisis at the US-Mexico border in order to pressure President Joe Biden into taking more serious action. Ducey’s government spent a reported $82,000 on each bus trip. The trips were free and voluntary.

The 2023 Arizona budget includes a $15 million provision for transporting migrants.

Hobbs told CNN on Nov. 22 that Ducey conducted “political stunts at the expense of taxpayer dollars,” including blocking gaps in the border wall with shipping containers after the federal government did not take steps to finish construction. The former secretary of state said in the same interview that Arizona bore “the brunt of decades of inaction from both parties in Washington.”

After being installed as governor, Hobbs said she was “encouraged by the White House’s recent actions to finally visit the border and to start proposing real steps to begin addressing the problems of the current system.”

“And while optimistic, I will also continue to push Congress to do its job and pass comprehensive immigration reform,” she said during her first state of the state address on Jan. 9. 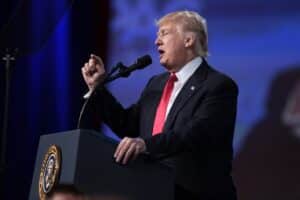 Poll: Trump Is the 2024 GOP Frontrunner