Poll: Trump Is the 2024 GOP Frontrunner

If the Republican primary election for 2024 was held today, former President Donald Trump would be the clear frontrunner, according to new survey data.

Trump currently holds a 20-point lead over Florida Gov. Ron DeSantis, who is widely believed to be the only competitive challenger to Trump.

In a hypothetical matchup, Trump would receive 48 percent of the vote, compared to DeSantis who would receive just 28 percent, according to a new Harvard-CAPS Harris Poll. Former Vice-President Mike Pence ranked third, with seven percent.

If Trump were not a candidate in the 2024 primary, Ron Desantis would win 49 percent of the vote, trailed by Pence (14 percent) and Sen. Ted Cruz (six percent).

The survey of registered voters was conducted Jan. 18- 19 and revealed American attitudes have soured over a number of issues, including the Biden administration’s handling of the country.

Six-in-ten voters say they believe the country is on the wrong track.

Two-thirds of voters say the economy is on the wrong track, largely driven by Democrats who have grown more upset with the economy since last summer. The sentiment of Republican and independent voters has remained steady.

Less than 40 percent of Americans say the U.S. economy is strong, while more than half say their financial situation is worsening.

Trust in the legislature remains low, with just over a third of Americans approving of the job Congress is doing. The three most favored institutions are the U.S. military, Amazon, and the police.

Fifty-three percent support a presidential candidate that is neither Trump nor Biden. 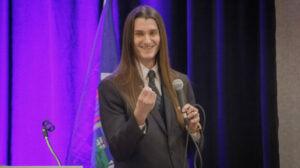