The head of NASA has issued a new warning about China’s ambitions to dominate space as the Chinese Communist Party (CCP) jockeys to complete the next manned lunar mission before the U.S.

NASA Administrator Bill Nelson says that Beijing’s space agenda may include dominating resource-rich areas on the moon and potentially denying the U.S. access.

“It is a fact: we’re in a space race,” Nelson said in an interview with Politico. “And it is true that we better watch out that they don’t get to a place on the moon under the guise of scientific research. And it is not beyond the realm of possibility that they say, ‘Keep out, we’re here, this is our territory.’”

Nelson cited an example of China’s takeover of a network of more than 100 small islands in the South China Sea, where their military has claimed them in their entirety. “If you doubt that, look at what they did with the Spratly Islands,” he said.

This latest concern over China’s influence in space comes a month after the Pentagon cautioned that the CCP could deploy space-based assets as offensive weapons, including kinetic-kill missiles, ground-based lasers, and orbiting space robots.

In their 2022 National Security Strategy, Defense Department officials say that China is the only nation on earth “with the intent and, increasingly, the capacity to reshape the international order,” Timcast previously reported.

“The PLA views space superiority, the ability to control the space-enabled information sphere and to deny adversaries their own space-based information gathering and communication capabilities, as critical components in conducting modern ‘informatized warfare,’” Pentagon officials say.

The U.S. military says China is aggressively working to conduct lunar and Martian exploration missions, noting that Beijing has doubled the number of launches per year, and has already launched a robotic lander and rover to the far side of the moon, as well as a separate orbiter, lander, and rover to Mars.

In November 2022, China completed it’s space station Tiangong, which will soon begin experiments on technology that will provide space-based power to earth wirelessly.

Some military experts have warned that such technology could be used as a directed energy weapon, allowing a hostile nation such as China to destroy its rivals.

“Every carrier battle fleet is a cork in the water,” said retired U.S. Air Force Lieutenant General Steven Kwast. “Every fleet of fighters is dead on the ramp, can’t even turn the wheel, because of our vulnerability. China has openly stated they are weaponizing everything.” 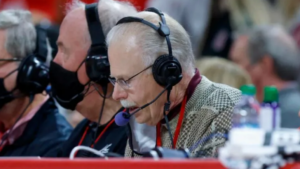