Paul Pelosi was attacked in his home in October

Speaker of the House Nancy Pelosi’s exit from politics may be on the horizon following the attack on her husband, Paul, in their San Francisco home.

The California congresswoman has sent mixed signals about her plans when questioned in the past.

Speaking with CNN’s Anderson Cooper, Pelosi detailed her experience of finding out about the attack from Capitol Police. The democrat was in Washington DC the night David Depape, the man arrested at Pelosis’ home, allegedly attacked her husband.

Paul Pelosi was hospitalized and underwent surgery for a brain injury.

Cooper asked Pelosi if she could confirm she plans to seek reelection during their interview. Pelosi was first elected to the United State House of Representatives in 1987 and is currently serving her 17th term in Congress. This is her fourth term as Speaker of the House.

Pelosi said her decision “will be affected about what happened the last week or two.”

“Will your decision be impacted by the attack in any way?” Cooper asked.

The speaker said her husband is “not complaining,” but has a ”long haul” recovery in front of him.

Pelosi warned that “our democracy is on the ballot” during midterm elections.

“I do believe that our democracy is in danger because of what the others are saying about undermining our elections, even now as we go forward,” she added.

In January, Pelosi announced her plans to run for her 18th term in Congress.

“Our Democracy is at risk because of assaults on the truth, the assault on the US capitol and the state-by-state assault on voting rights,” the Democrat said.

“This election is crucial. Nothing less is at stake than our Democracy,” Pelosi added. “But as we say, we don’t agonize, we organize. And that is why I am running for re-election to Congress.”

She did not say if she would run for Speaker of the House again.

The announcement shocked some. In 2020, Pelosi said she would abide by term limits for the House’s top three leadership roles even though the proposal was never formally adopted. Pelosi’s statement indicated she would retire in 2022. 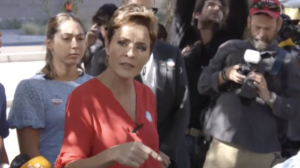