UPDATE: Paul Pelosi was reportedly attacked with a hammer by his assailant who entered through the back of the house. Law enforcement sources said there may be security footage available for the United States Capitol Police (USCP) to review, CNN reported.

USCP announced they were assisting the FBI along with the San Francisco police in a joint investigation regarding the attack. Special agents with USCP’s California Field Office “quickly arrived on scene” with investigators from the Department’s Threat Assessment Section from the east coast to assist the FBI and San Francisco police, according to a statement from the USCP.

“The President is praying for Paul Pelosi and for the Speaker Pelosi’s whole family,” said White House Press Secretary Karine Jean-Pierre in a statement shortly after news broke of the attack. The President reportedly called the Speaker to express his support and further condemned all violence, according to the statement.

Nancy Pelosi’s husband was assaulted in their San Francisco residence early Friday morning, according to a statement from Pelosi’s office.

The Speaker of the House was not in San Francisco at the time.

Pelosi’s husband, Paul, 82, was “violently assaulted” by an intruder who broke into their residence. Mr. Pelosi was reportedly taken to the hospital and is expected to recover. The assailant is in custody though the motivation for the attack is unclear, according to the statement from Pelosi’s spokesperson Drew Hammill.

“Early this morning, an assailant broke into the Pelosi residence in San Francisco and violently assaulted Mr. Pelosi,” read the statement. “The assailant is in custody and the motivation for the attack is under investigation. Mr. Pelosi was taken to the hospital, where he is receiving excellent medical care and is expected to make a full recovery. The Speaker was not in San Francisco at the time.”

“The Speaker and her family are grateful to the first responders and medical professionals involved, and request privacy at this time,” the statement concluded.

The Speaker of the House has fulltime security detail though her husband does not fall under federal protection, Daily Mail reported.

In August, Paul Pelosi pleaded not guilty to misdemeanor charges related to driving under the influence (DUI) after he was in a car accident in late May. He was sentenced to five days in jail in Napa County, California.

The Pelosis have been married since September of 1963. The couple has five children.

This story is still unfolding and will be updated. 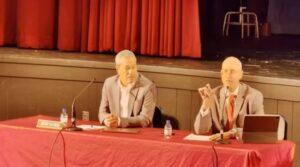