A new poll shows the majority of U.S. citizens who voted for President Donald Trump would support secession.

The Center for Politics at the University of Virginia found that 52% of Trump supporters and 41% of Biden supporters would support states seceding from the union along blue and red lines.

“Roughly 2 in 10 Trump and Biden voters strongly agree it would be better if a ‘President could take needed actions without being constrained by Congress or courts,’” the Center for Politics found.

The respondents generally saw American democracy as a rigged system that benefits the wealthy.

The Center for Politics’s findings echo the results of a YouGov poll published over the summer which measured interest in secession both by political affiliation and geographic area of the country. At that time, 66% of Republicans in the Southern region of the United States supported a so-called “national divorce.” Similarly enthusiastic were Independent voters in the south at 50% as well as 47% of Democrats in the Pacific region.

At the time, BrightLine Watch, a self-described “initiative to monitor democratic practices,” noted “secession is a genuinely radical proposition.”

Even so, the notion of a separation has recently gained some popularity.

“We are a donor state that pays out more in federal income taxes than what we get back,” Sylvia said.

According to Mediaite, “President Joe Biden largely ran on a platform of reunification, and despite an effective six first months of largely positive approval ratings, recent missteps in Afghanistan, and a resurgence of Covid infections, which is — ironically, largely due to Trump supporters refusal to get a vaccine — have led to his approval being underwater.”

Editor’s Note: A previous version of this article ran a headline that excluded the fact that a significant number of Biden supporters agree with the notion of a succession. 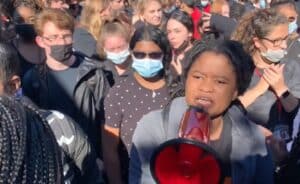