Lawmakers in New Hampshire are considering a constitutional amendment to secede from the rest of the country.

State Representative Mike Sylvia filed a proposal that would make New Hampshire its own nation-state, independent from Washington D.C.

“There are hundreds of examples of the federal government overstepping its authority. Enough is enough. We should put this before the voters to decide,” he told The Center Square.

Sylvia cited the U.S. Centers for Disease Control and Prevention’s eviction ban and President Joe Biden’s mandate which requires federal workers to get the COVID-19 vaccine as examples of federal overreach.

He also mentioned that New Hampshire, which has no state income tax, is obligated to pay federal income tax.

“We are a donor state that pays out more in federal income taxes than what we get back,” Sylvia said.

Seceding from the U.S. would benefit residents financially even if does mean a loss of federal funding, the representative noted.

According to the Concord Monitor, Sylvia “moved to New Hampshire as part of the Free State Project, a movement committed to attracting newcomers to New Hampshire and shrinking the size of state and local government.”

The measure does not need the approval of New Hampshire Governor Chris Sununu, but it will need to be approved by 60% of the state’s House and Senate in order to be put before voters. The state’s legislature currently has a Republican majority.

Liberty Block, a group that says it is “working to advance liberty in New Hampshire and beyond,” supports Sylvia’s efforts, arguing that residents haven’t had an opportunity to reevaluate the state’s relationship to the federal government in over 200 years.

“Their ancestors made the decision to join the union 240 years ago, in a different world, one in which the federal government did not violate our every right, and did not steal half of our money to fund their tyranny,” Liberty Block posted online.

In a message addressed to progressives on its website, the group said, “As states become more independent, and eventually exit the failing union (The United States), please let us go our separate ways. We in New Hampshire do not want to be forced to live under the same laws as progressives in California, and we know that the feeling is mutual. No hard feelings!”

The referendum will be considered in January when the next legislative session is underway.

If added to the 2022 ballot, it would read: “New Hampshire peaceably declares independence from the United States and immediately proceeds as a sovereign nation. All other references to the United States in this constitution, state statutes, and regulations are nullified.” 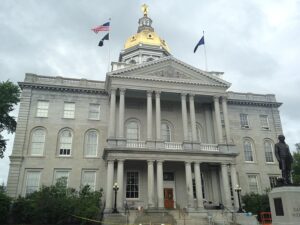