'Make Them Pay': Protesters Opposing Construction of Atlanta PD Training Facility Call For 'Retaliation' After One Was Shot By Police

A Twitter account associated with a group of “forest defender” protesters opposing the construction of a new Atlanta Police Department training facility has called for a night of “retaliation” after one of their own was shot by police.

The $90 million training facility known as “Cop City” will sit on 381 acres in the Weelaunee Forest.

Protesters have been camping in trees and on the grounds where the construction is meant to occur for over a year, claiming to be defending the forest. The group appears to be a mix of anti-police militants and environmental activists.

On Wednesday, as police attempted to clear the encampment, a Georgia State Patrol trooper wearing a bulletproof vest was shot in the abdomen. Other officers returned fire and fatally shot the protester.

The officer was taken to the hospital for emergency surgery and is said to be in stable condition.

“At about 9:00 a.m. today, as law enforcement was moving through the property, officers located a man inside a tent in the woods. Officers gave verbal commands to the man who did not comply and shot a Georgia State Patrol Trooper,” the Georgia Bureau of Investigation said in a statement. “Other law enforcement officers returned fire, hitting the man.”

The statement continued, “Law enforcement evacuated the Trooper to a safe area. The man died on scene.”

“The injured Georgia State Patrol Trooper was taken to a local hospital where he underwent surgery,” GBI continued. “A handgun and shell casings were located at the scene. The GBI is working the officer-involved shooting and the investigation is still active and ongoing.”

Georgia police shot and killed a man while removing protesters from the area of Atlanta’s planned “Cop City,” saying he fired at police and wounded a state trooper.

The movement to resist one of the largest police training facilities in the U.S. began over a year ago. pic.twitter.com/Fe7PxbJ3oZ

In response, an account that claims to be a part of Defend the Atlanta Forest movement called for violence against “police and their allies.”

“A CALL FOR RETALIATION Consider this a call for reciprocal violence to be done to the police and their allies,” the account tweeted. “On Friday, January 20th, wherever you are, you are invited to participate in a night of rage in order to honor the memory of our fallen comrade.” 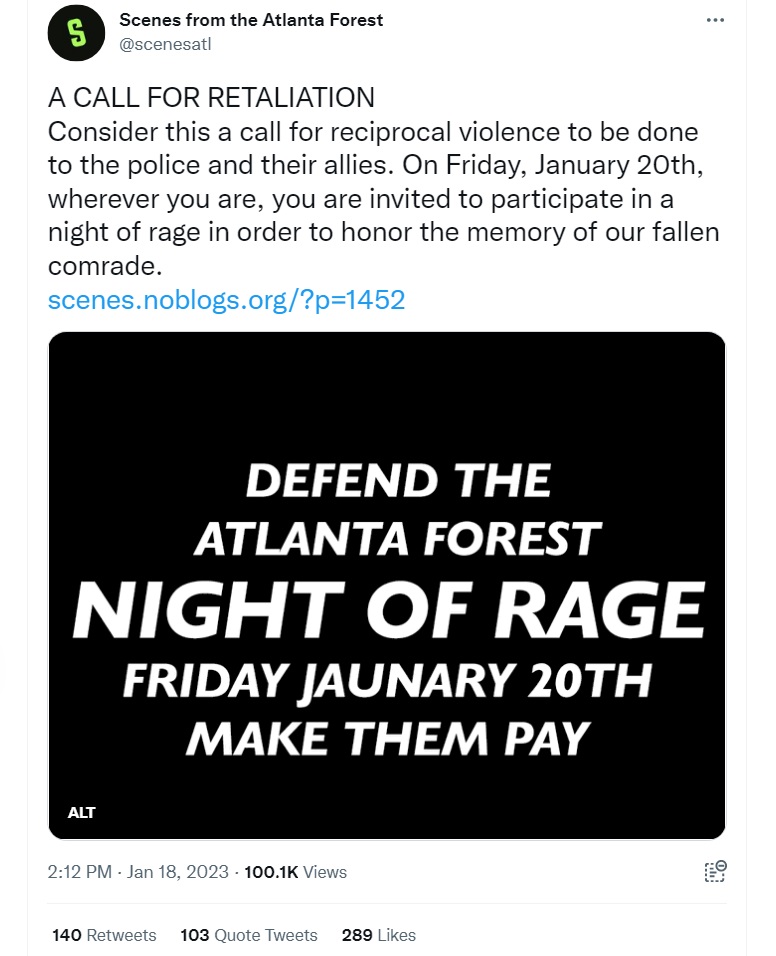 The tweet also linked to a blog sharing the same sentiment.

Additionally, the account provided links to Antifa websites with lists of police officers that they claim were “responsible for this murder.”

“Are you wondering what you can do about the forest defender that was martyred today, please consider the following resources that list those responsible for this murder,” the account wrote in the tweet with the links. 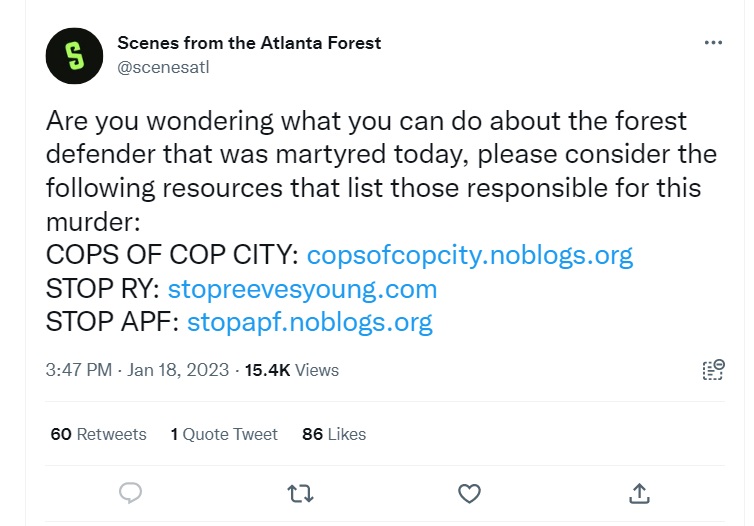 “The police will kill you if given the chance. Now is the time for bravery. Take care of each other. Be dangerous together,” the account wrote in another tweet.

A demonstration over the incident has also been called for 5 p.m. on Saturday, and attendees are told to “wear black.”

A demo has been called on Saturday in Atlanta after police murdered a forest defender this morning pic.twitter.com/PWx3tC9O4n

In a press release about the arrests, the GBI alleged that protesters had been involved in a series of serious criminal activities, including “carjacking, various crimes against persons, destruction of property, arson, and attacks against public safety officials. Law enforcement continues to address the criminal acts committed by the individuals that continue to occupy the area of the proposed training site.”

Police in Atlanta are blocking press and citizens from entering the park rn. The COP CITY training facility would be the largest in the nation. Plans include a mock city for urban warfare training with firearms, tear gas, helicopters, and explosive devices #stopcopcity pic.twitter.com/h7wt7DHI6I

Video submitted by a treesitter: police fire chemical irritants in the direction of treesits. Reports of pepper balls being fired by police. Sound on. pic.twitter.com/VCAEHDtXVe

Marlon Kautz of the Atlanta Solidarity Fund, which provides legal support for people arrested during protests, told Fox 5 Atlanta at the time of the charges being filed that the protestors were “unarmed and not violent.” 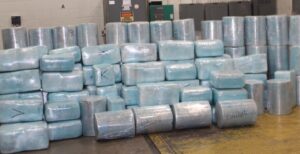