The repeal was one paragraph of the $858 billion defense bill

The United States House of Representatives passed an $858 billion defense bill that ends the COVID-19 vaccine mandate for military members.

The passage of the House Defense Bill was celebrated by a number of political leaders who have argued the mandate hurt recruitment and retention efforts as well as ultimately weakens national security.

In total, 180 Democrats and 149 Republicans voted in favor of the bill on Dec. 8 while 62 Republicans and 39 Democrats were opposed.

Prominent Republicans called for the mandate’s repeal ahead of the chamber’s vote.

“Without question, the Department of Defense COVID-19 vaccine mandate has ruined the livelihoods of men and women who have honorably served our country,” wrote Kentucky Senator Rand Paul and Florida Senator Rick Scott in an opinion piece for Fox News. “As of April 2022, approximately 3,400 troops have been discharged from the military for refusing to be vaccinated against COVID-19. While the Department of Defense certainly must make decisions that will bolster military readiness, the effects of the mandate are antithetical to readiness of our force, and the policy must be revoked.”

“The Biden vaccine mandate on our military creates a national security risk that severely impacts our defense capabilities abroad and our state readiness here at home,” the governors wrote. “As Governors, our ability to respond to natural disasters and conduct emergency operations is contingent upon the strength and size of our National Guard units. As Congressional leaders, it is your duty to provide for the national defense, and therefore, we call upon you to protect the men and women in uniform—who protect us—from an unnecessary vaccine mandate.”

Washington Representative Adam Smith, the Democratic chairman of the House Armed Services Committee, has said it is “time to update the policy” regarding the COVID-19 vaccine for military members.

“It saved lives and it made sure that our force was as ready as it could possibly be in the face of the pandemic,” Smith said, per Military.com.

Defense Secretary Lloyd Austin and Biden both oppose the end of the COVID-19 Vaccine mandate.

“Secretary Austin’s been very clear that he opposes the repeal of the vaccine mandate and the president actually concurs with the secretary that he continues to believe that all Americans including those in the armed forces should be vaccinated and boosted for COVID-19,” said White House national security spokesman John Kirby, per CNBC.

“Vaccines are saving lives and including our men and women in uniform,” Kirby added. “So this remains very, very much a health and readiness issue for the force.”

Austin told reporters on Dec. 3 that the mandate kept people healthy and that he supported keeping it as a mandatory requirement for service members.

Military members are still required to get vaccinated against measles, the flu, hepatitis A and B, meningococcal disease, polio, tetanus, chickenpox, diphtheria and pertussis.

The over 4,000-page bill is $45 billion more than the budget requested by the Biden administration.

It also earmarks another $800 million for Ukraine. In total, the Defense Department reports the US has supplied about $16.2 billion already to the European nation since the beginning of its war with Russia on Feb. 24.

The budget also sets aside $10 billion for security assistance in Taiwan to be paid over the course of five years.

The bill now heads to the Senate, where it is expected to pass. 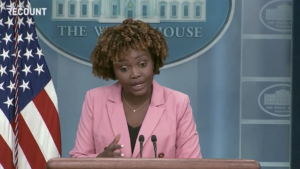