The Secretary of the Department of Defense intends to keep in place a COVID-19 vaccination mandate for military members.

The mandate is being openly opposed by 21 governors across the country because of the consequence the mandate has on military preparedness and national security.

While traveling with reporters on Dec. 3, Secretary Lloyd Austin said America had lost “a million people to this virus.”

“A million people died in the United States of America. We lost hundreds in DOD. So this mandate has kept people healthy,” he said, per The Military Times. “I support [the] continuation of vaccinating the troops.”

Austin announced in August of 2021 that he would require all members of any military branch to get the COVID-19 vaccine by mid-September or as soon as the vaccine was formally licensed by the Food and Drug Administration. He also authorized the military to impose additional restrictions on those members who were unvaccinated at the time of his memo.

The plan was endorsed by President Joe Biden, who had mandated all government employees to get the vaccine just one month prior.

Approximately 2 million federal workers and 2 million service members would have been obligated to get the COVID-19 vaccine.

“What’s happening in America right now … is a pandemic of the unvaccinated… The vaccines are safe [and] highly effective. There’s nothing political about them,” Biden said in a statement, per Business Insider. “This is not about red states and blue states. This is about life and death.”

Subsequently, Biden said, “The pandemic is over” during an interview with 60 Minutes that aired on Sept. 18, 2022.

The Department of Veterans Affairs was the first federal agency to require its health workers to get the COVID-19 vaccine. At the time, 70% of VA workers were vaccinated.

Austin’s comments in favor of the vaccine came days after a collation of 21 governors sent a letter to Congressional Leadership requesting they intervene and repeal the federal COVID-19 vaccine mandate for military members.

The coalition argued that the mandate “creates a national security risk that severely impacts our defense capabilities” both domestically and abroad because it drives service members to leave their branches and deters potential recruits from enlisting.

In April of 2021, the United State Marine Corps reported 40% of its members who had been offered the COVID-19 vaccine declined to take it.

“The Biden vaccine mandate creates a national security risk that severely impacts our defense capabilities abroad and our state readiness here at home,” argued the group. “As Governors, our ability to respond to natural disasters and conduct emergency operations is contingent upon the strength and size of our National Guard units. As Congressional leaders, it is your duty to provide for the national defense, and therefore, we call upon you to protect the men and women in uniform—who protect us—from an unnecessary vaccine mandate.”

The majority of military branches have struggled to reach their recruiting goals during the last year. 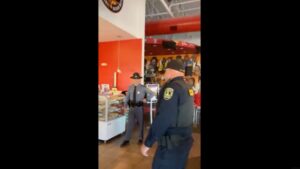