Potter was convicted of manslaughter in the death of Daunte Wright

Kim Potter was given a 24-month sentence by a Minnesota judge and will serve 16 months in prison.

Handing down her decision on Feb. 18, Judge Regina Chu ordered that the remaining 8 months would be served under supervised release. Potter will also be fined $1,000.

Potter was convicted of first-degree manslaughter and second-degree manslaughter in December for the death of Daunte Wright. The 49-year-old was a police officer in the Minneapolis-Saint Paul suburb of Brooklyn Center at the time of the April 11 incident.

During a routine arrest, Potter shot the 20-year-old after confusing her handgun for her taser. Video recorded at the scene captures Potter yelling “Taser” several times before she fires her gun into Wright’s chest.

Prosecutors were initially seeking a sentence longer than seven years because of the “recklessness” of her actions, per ABC News.

Chu called the case “one of the saddest” she had presided over during her 20-year tenure. She called the shooting a “tragic error” and said she did not foresee “a danger of future crimes.”

“There is no question that Mrs. Potter is extremely remorseful,” Chu said.

“This was an unintentional crime,” Defense attorney Paul Engh said. “It was an accident. It was a mistake.”

Engh told the court that he did not think Potter would ever get over killing Wright. He also noted that his client’s mental and physical health has declined as a consequence of being isolated while in the state’s custody but that, as a former police officer, Potter would be “vulnerable to assault” if housed in the general prison population.

“If you send her to prison, you will harm her,” Engh says. “And we are not in the business of harming defendants.”

Prosecutor Matthew Frank said that “remorse is not enough” and asked Chu to sentence Potter to a full seven years in prison.

“His name is Daunte Wright,” Frank says. “We have to say his name. He was not just a driver. He was a living human being, a life. The highest principle of law enforcement is the sanctity of life.”

The prosecution also brought up Potter’s mug shot, where she is seen smiling, as evidence of her alleged lack of remorse.

In her address to the court, Potter cried as she apologized to Wright’s family.

“I am so sorry that I brought the death of your son, father, brother, uncle, grandson, nephew and the rest of your family to your home,” Potter says. “My heart is broken for all of you.”

“She never intended to hurt anyone,” Chu said while addressing the court. “Her conduct cries out for a sentence significantly below the guidelines.” 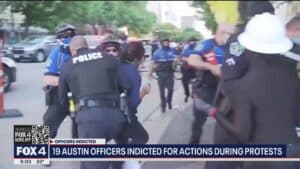