The House Speaker in Illinois was sued after Democrat representatives voted to expel unmasked Republicans from the chamber.

The House had been debating COVID-19 protection measures — including temperature checks, mask mandates, and social distancing — for three days.

House Republicans released a statement on Feb. 15 saying they were not going to participate in “mask theater” attended the sessions without face coverings, according to a report from radio station WMAY.

Democrat Representative Lakesia Collins of Chicago moved on Feb. 16 to eject any members who were not wearing masks. Under House rules, masks are required in the chamber and while addressing the chamber.

Collins then dismissed the motion and the members adjourned to meet with their committees.

The Democrat then reintroduced the motion to expel those who were not complying with the mask mandate on Feb. 17.

“I find it pretty unfortunate that this is the second vote we’re having to remove members of the body and we haven’t taken one vote or held one hearing on the governor’s mitigations,” Batinick said. “Not one single vote. You guys have chosen to abdicate your guy and provide oversight. Live with it.”

“Hypocrisy is the tribute vice pays to virtue and you are living examples of that statement,” said Republican Representative Steve Reick.

Collins was insistent that the lawmakers wear masks and continued to push for a vote.

“Every minute we waste talking to you all while you over there whining about wearing a mask, those people are still suffering and need your help,” Collins responded. “So do your job and comply with the rules of this House. If not, go remote. Simple.”

Ultimately, the majority of the Republican representatives left the House and the session was continued remotely. Republican Represenative Tony McCombie was unable to vote on a resolution in person after her key was removed, per WMIX94.

“Speaker Welch has no authority whatsoever to place quarantine measures on the peoples’ representatives to keep them out of that chamber,” DeVore told The Center Square. “It doesn’t even make any sense.” 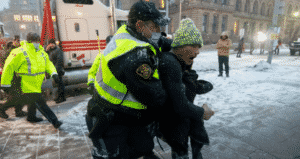