The Ottawa Police announced they will take action against any media personnel at the Freedom Convoy.

In a Feb. 18 statement posted to Twitter, the department advised the press to “keep a distance and stay out of police operations for your safety.”

“Anyone found within areas undergoing enforcement may be subject to arrest,” Ottawa Police said. Press was directed to gather at a different location for updates from law enforcement.

All media who are attending the area, please keep a distance and stay out of police operations for your safety. Anyone found within areas undergoing enforcement may be subject to arrest. There will be a media availability later today at 474 Elgin Street. #ottnews

“It’s time to go,” Bell said. “Your time in our city has come to an end and you must leave.”

“There is a deliberate plan, there is commitment and there’s the resourcing that we now have in place to end this,” he added.

Law enforcement then sealed off the downtown area the truckers have occupied to anyone outside the premises. Only residents, police, and workers are allowed to enter the zone. The police also added new fencing near the encampment on Wellington Street on Parliament Hill.

According to reports from the Canadian Broadcasting Corporation, temporary detention centers were set up around the protest perimeter.

Two of the movement’s leaders were arrested in the evening. Tamara Lich and Chris Barber are in police custody and will likely face criminal charges.

Lich posted a video online acknowledging that she was likely to be arrested, per Fox News. In a message to those taking part in the movement, she said she was “ready” and “not afraid.”

Police began arresting protestors this morning, three weeks into the anti-mandate demonstration that gridlocked the nation’s capital. Officers went door-to-door among the trucks, campers and assorted vehicles in the area near Parliament.

“Some protesters surrendered and were taken into custody, police said. Some were led away in handcuffs,” reports Wish TV. “One person being taken away carried a sign that read ‘Mandate Freedom.’”

Law enforcement reported demonstrators on Nicholas street were ordered to leave immediately or else they would be arrested. 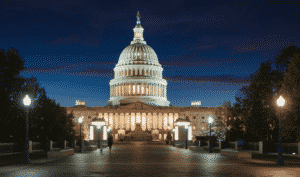