Democrats Want to Rename Over 1,000 Rivers, Mountains and Places With 'Racist' Names

In their crusade to purge any hint of real or perceived “racism” from the United States, Democrats are seeking to change the names of over 1,000 rivers, mountains and places with names that they consider “racist.”

Democrats in both chambers introduced bills to purge things named after historic people who “held racially repugnant views” or “carried out injustices against racial minorities.”

The bills, introduced by Sen. Elizabeth Warren of Massachusetts and Rep. Al Green of Texas, call for the creation of a special task force to eradicate names it considers offensive.

“Racism, even in geography, cannot be tolerated in a country that strives for liberty and justice for all,” Green said of his bill.

The Washington Times reports that “the lawmakers refused to provide a list of names that would be targeted. Places such as Columbus Mountain in Colorado or other places named after Christopher Columbus could arguably make the list because critics of the famed explorer say he was an instrument of injustice due to his ill treatment of indigenous people.”

Critics of the push for new names argue that it is an attempt to cancel and cleanse US history — and that they are going too far.

“This has nothing to do with the intended purpose but in an attempt to rewrite our history, no different than the way the Russian Communist Party used to rewrite the Great Soviet Encyclopedia whenever someone fell out of favor with the party,” Hans von Spakovsky, a senior legal fellow at the conservative Heritage Foundation’s Meese Center for Legal and Judicial Studies told the Times.

“We should do all we can to preserve all of our history, both good and bad, so that we are well educated on everything this country has experienced and to ensure that we do not in the future make some of the mistakes we have made in the past,” he said. “Destroying and rewriting history that does not fit within today’s cultural norms is a mistake.”

As Timcast previously reported, Gypsy moths and ants are also being renamed as part of the Entomological Society of America’s Better Common Names Project — which seeks to get rid of terms that may be offensive in insect names.

The ESA is now asking the public to help them find things that people might be outraged about, so that they can change those names too. 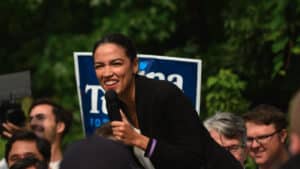 Defund Prisons Next? AOC Calls for ‘Abolishment’ of ‘Carceral System’ in America