Defund Prisons Next? AOC Calls for ‘Abolishment’ of ‘Carceral System’ in America

Congresswoman Alexandria Ocasio-Cortez called for the “abolishment” of the entire “carceral system” in the United States Monday because it was “designed to trap Black and Brown men.”

The self-described Democratic-Socialist was speaking at a campaign event for former state Senator and ex-Bernie Sanders campaign co-chair Nina Turner, who is running to represent Ohio’s 11th Congressional District.

“I want to abolish our carceral system that’s designed to trap Black and Brown men,” AOC told a rally of Turner supporters in Cleveland. “I want justice, I want peace, and I want prosperity. That’s what I want.”

"I want to abolish our carceral system that's design to trap Black and Brown men. I want justice. I want peace. And I want prosperity." – @AOC

Now is the time to mobilize to elect @ninaturner to Ohio's 11th Congressional District. #HelloSomebody pic.twitter.com/FOskVCQtBR

The controversial congresswoman made national headlines earlier this summer when she dismissed the rising crime rate in nearly all 50 states as “hysteria.”

“We are seeing these headlines about percentage increases,” Ocasio-Cortez said during a conversation with New York Rep. Jamaal Bowman over Zoom. “Now, I want to say that any amount of harm is unacceptable and too much, but I also want to make sure that this hysteria, you know, that this doesn’t drive a hysteria and that we look at these numbers in context so that we can make responsible decisions about what to allocate in that context.”

“If we want to reduce violent crime, if we want to reduce the number of people in our jails, the answer is to stop building more of them,” Ocasio-Cortez said. “The answer is to make sure that we actually build more hospitals, we pay organizers, we get people mental health care and overall health care, employment, etc. It’s to support communities, not throw them away.” 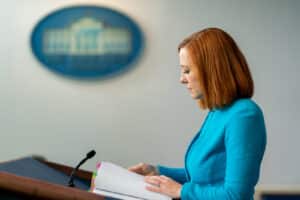 White House Will Maintain Travel Restrictions Because of Delta Variant

5 responses to “Defund Prisons Next? AOC Calls for ‘Abolishment’ of ‘Carceral System’ in America”