White House Will Maintain Travel Restrictions Because of Delta Variant

The delta variant was first detected in India and has been widely reported in the U.S.

Citing concerns about the delta variant of COVID-19, The White House announced Monday that it will continue to restrict foreign travel.

White House press secretary Jen Psaki noted at a briefing that the Centers for Disease Control and Prevention, as well as the State Department, advised Americans against travel to the United Kingdom last week due to the rising number of cases in the region, according to U.S. News & World Report.

“Given where we are today … with the delta variant, we will maintain existing travel restrictions at this point for a few reasons,” Psaki said. In addition to the feared variant, she said rising coronavirus cases — “particularly among those who are unvaccinated” — were another factor in the administration’s decision to maintain travel restrictions.

“The announcement almost certainly dooms any bid by U.S. airlines and the U.S. tourism industry to salvage summer travel by Europeans and others covered by the restrictions. Airlines have heavily lobbied the White House for months to lift the restrictions and some say the industry may now have to wait until September or later for a possible revision,” Reuters reports.

Under most circumstances, non-U.S. citizens who have been in the United Kingdom, the 26 Schengen nations in Europe without internal border controls, Ireland, China, India, South Africa, Iran, or Brazil within the last 14 days are not permitted entry into the country.

“The extension comes not long after the Canadian government announced that starting Aug. 9, United States citizens and permanent residents who have been fully vaccinated for at least two weeks will be able to cross the border. On Sept. 7, Canada plans to open the country to any fully vaccinated travelers,” CBS Minnesota says.

The complex rules regarding permitted travel and immigration have inspired questions from both liberals and conservatives. During her visit to Washington, German Chancellor Angela Merkel pressed President Biden today when travel will reopen, says CNN.

Biden said he’d have more to announce in the “next several days.”

Because of the global pandemic and lockdowns, travel spending declined by an unprecedented 42% during 2020. The U.S. Travel Association noted that by December of 2020 “the pandemic [had] resulted in $492 billion in cumulative losses for the U.S. travel economy, equating to a daily loss of approximately $1.6 billion for the past 10 months.” The organization reports international travel spending fell by 76%.

According to Reuters, the Biden administration has refused to offer any metrics that would trigger when it will unwind restrictions.

The CDC classifies the delta variant as highly contagious and reported last week that the variant was detected in 80% of new COVID-19 cases in the United States. 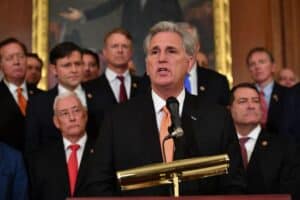