The jury found Brooks guilty of all 76 charges

The man accused of driving an SUV into the Waukesha Christmas Parade has been convicted of six counts of first-degree intentional homicide while using a dangerous weapon.

In addition to the murder charges, the state brought 70 other charges against Darrell Brooks for his role in the mass casualty event in November of 2021.

The jury deliberated for approximately three hours and 15 minutes before returning a verdict of guilty on all charges.

One person was removed from the gallery for yelling “Burn in hell you piece of s—” after the third homicide verdict was read.

Waukesha County Circuit Judge Jennifer Dorow scheduled a hearing for Oct. 31. at 1 PM. She asked Brooks and the prosecution to determine how much time they will need to present before sentencing. Family members of both the victims and the defendant could be called to speak before the court.

While he had entered a plea of “not guilty by reason of mental disease or defect,” Brooks ultimately changed his plea to “not guilty,” fired his defense team, and was granted the right to represent himself.

Brooks’ argumentative and defiant behavior played a notable role in the trial. He argued with Dorow throughout the trials, demanding a copy of her oath of office and raising a number of legal objections Dorow ruled to be meritless. Brooks repeatedly told the court he did not recognize the name “Darrell Brooks” even though it appears on jail communication. He was regularly removed to a separate courtroom to participate virtually after being reprimanded by Dorow for interrupting court proceedings. Brooks also requested on multiple occasions that the case against him be dismissed.

In her closing arguments, Waukesha County District Attorney Susan Opper reiterated the state’s established timeline and presented a map marking where the red SUV driven hit each one of its victims.

Opper stressed that the vehicle never slowed down which she argued demonstrated Brooks’s intent to hurt people.

“It didn’t faze him a bit,” the DA told the jury. “He kept going until he got to the end and there were no more bodies to hit.”

“One thing that I believe that you have not been privy to is the truth of your rights and your duties being the jury,” Brooks said during his closing arguments. “The fact that you and you alone, have the power, not well-prepared DAs with well-prepared and clearly rehearsed speeches, exhibits, a lot of theatrics. Frankly, not the judge.”

Jackson Sparks, 8, Tamara Durand, 52, Jane Kulich, 52, LeAnna Owen, 71, Virginia Sorenson, 79, and Wilhelm, 81, all died after being struck by the SUV that drove into the Christmas parade.

Brooks has been convicted of multiple crimes in several states.

According to Fox News:

The jury is not required to maintain secrecy about their deliberations after being dismissed by the judge. 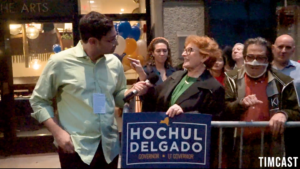