Bryson Gray, a popular Christian conservative rapper, has been permanently banned from Twitter.

The platform claimed that Gray violated the policy against “hateful conduct” but did not provide a specific tweet or example of him violating the rules.

Gray suspects that it is because he called Elton John “gay,” which the singer openly is.

“I have not gone against any guidelines,” Gray told Timcast. “The only way my tweets could get me banned is if it’s personally interpreted by some liberal that works at Twitter, which is exactly what’s being exposed in the Twitter files and is obviously still going on.”

Gray continued, “if it’s because I called Elton John gay, then that would be weird since he’s known for being gay. I’ve been on Twitter for over 8 years and I’ve never been banned until the ‘savior of free speech’ took over. Interesting.”

Late last month, Gray’s newest song, “Burn Balenciaga,” went viral as the fashion house has been under fire for a series of images from their new campaigns that featured children holding stuffed animals in bondage gear, a Supreme Court ruling about child pornography, and other signals of support for pedophilia.

Burn Balenciaga is still available on iTunes and Spotify.

Gray is best known for his viral songs Trump is Your President, Safe Space, Gun Totin’ Patriot, and MAGA Steppin’.

Twitter has recently reinstated many popular conservative accounts that have been banned over the years, but the bans have continued.

Musk has said he will not reinstate Alex Jones because he took personal offense to his comments about Sandy Hook and banned Ye because he “wanted to punch him.”

These unexplained bans have been taking place as the new Twitter owner seeks to expose censorship on the platform before he took ownership.

However, Musk has stated that shadowbanning will remain part of the platform’s policy.

“New Twitter policy is freedom of speech, but not freedom of reach,” Musk said in a tweet in November. “Negative/hate tweets will be max deboosted & demonetized, so no ads or other revenue to Twitter. You won’t find the tweet unless you specifically seek it out, which is no different from rest of Internet.” 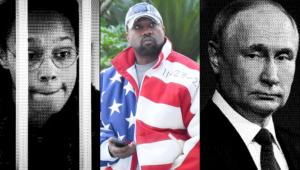