Stelter will host a series of discussions focusing on threats to democracy and the news media’s potential responses in order to deepen public and scholarly understanding about the current state of the information ecosystem and its impacts on democratic governance, the Shorenstein Center said in their Monday statement.

“Brian Stelter is a nationally recognized media reporter and expert on the state of journalism and its wide-reaching implications for society and governance,” the statement noted.

The Walter Shorenstein Media and Democracy Fellowship reportedly brings high-profile journalists, academics, and practitioners in the fields of media, politics and public policy to Harvard University in hopes to engage with the Center’s research projects, faculty, students, and the broader university community, according to the Shorenstein Center’s Fellowship Program.

NEWS: @brianstelter is coming to the @Kennedy_School as the center's 2022 Walter Shorenstein Fellow! He'll be holding a series of public events and community discussions about democracy and the role of the media in preserving it. Welcome, Brian! https://t.co/oJRFm5K9nZ

In August, CNN announced they were canceling their long-running program “Reliable Sources” which premiered in 1992. Stelter subsequently left the company after the show’s final episode on Aug 21. after hosting the show for 9 years.

The network’s cancellation of “Reliable Sources” comes after CNN’s new president, Chris Licht, who formerly served as a producer for CBS, announced plans for the network to adopt a less partisan tone, according to Axios.

The company had previously fired fellow network figure Chris Cuomo in December 2021 for his alleged involvement in aiding his brother, former New York Governor Andrew Cuomo, during the sexual assault allegations that led to his resignation earlier in the year.

Most recently, former CNN President Jeff Zucker reportedly announced his resignation from the company in February due to a “consensual relationship“.

Similarly, Harvard previously announced in late August that Bill De Blasio, the former Democratic Mayor of New York City, would also be joining the University as a visiting fellow in their The Institute of Politics (IOP) program during the Fall 2022 semester.

“I am happy to join the IOP to help inspire our nation’s next generation of leaders to find ways to serve in politics and public service, and to build a government that serves working people,” the former Mayor said in IOP’s press statement. 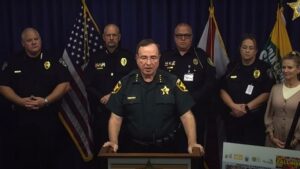