Polk County Sheriff Warns Criminals: 'If you come here and violate the law, we’re gonna put you in jail'

A multi-agency human trafficking sting in Florida has resulted in the arrest of 160 people, including a Disney employee and school workers.

Detectives charges the individuals arrested with a total of 52 felonies and 216 misdemeanors.

“The online prostitution industry enables traffickers and allows for the continued victimization of those who are being trafficked,” Sheriff Grady Judd said in a statement. “Our goal is to identify victims, offer them help, and arrest those who are fueling the exploitation of human beings (Johns) and those profiting from the exploitation of human beings.”

Authorities say that 26 of the people arrested are married, 15 of those arrested were from other states and one was from Puerto Rico.

Police also noted that the criminal histories of everyone arrested include 419 previous felonies and 619 prior misdemeanors.

Several arrestees were working at a school at the time of their arrest. Carlos Gonzalez, 36, is employed as a math teacher at New Dimensions High School in Osceola County. John Layton, 26, is a non-faculty coach at West Orange High School in Orange County. Gonzalez agreed to have sex with two undercover detectives, and Layton agreed to pay for a sex act, according to police.

Two other men were employed by Disney. Guillermo Perez, 57, works for Disney’s Coronado Springs Resort, and Samy Claude, 26, is a photographer who is often contracted by Disney, police say. Both men agreed to have sex with an undercover detective and police note Claude “brought a bag of sour Skittles for the undercover detective.”

In a press conference to announce arrests made in the sting, Judd said, “Only 16 of the 160 were from Polk County. I think the people of Polk County are about to get the message that if you come here and violate the law, we’re gonna put you in jail.”

The sheriff took time to tell viewers that victims of human trafficking are typically people who have endured considerable hardship in their personal lives.

Many of the victims “have had a really tough life and we’re trying to break the cycle,” he told reporters, as he held up a blurred photo of one of the victims who was rescued.

The victim, he said, was 10 weeks pregnant and had been taking drugs, specifically fentanyl, hoping and praying that naturally she could abort the baby.

“That’s the kind of sadness we see,” he said.

Florida law enforcement officers were working with the Florida Department of Children and Families (DCF), as well as multiple social services organizations, to provide relief services to human trafficking victims who were rescued. 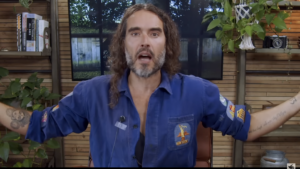