A Hungarian historian and businesswoman accused Boris Johnson of having “the usual British colonialist attitude” after he called for the nation’s fans to be punished for directing racist remarks to English soccer players.

“Boris Johnson, you’re at the head of a small, decaying country. Get on with it and clean your own house. You’ve got a lot to do,” wrote Mária Schmidt in an open letter.

The British Prime Minter tweeted a condemnation of the Hungarian fans who made racist comments during a soccer match in Budapest.

It is completely unacceptable that @England players were racially abused in Hungary last night.

I urge @FIFAcom to take strong action against those responsible to ensure that this kind of disgraceful behaviour is eradicated from the game for good.

FIFA governs soccer worldwide and is expected to open disciplinary action against Hungry.

“Hungary [was] given a two-match stadium ban by European football’s governing body UEFA as recently as July after allegations of racist chanting and homophobic banners being displayed during Euro 2020 matches against France and Portugal,” reports PA Media. “However, the ban did not come into effect for the World Cup qualifier against England because it is a FIFA competition.”

“The British football players came to our capital as guests, and they infuriated Hungarian supporters with a gesture that we feel is a disingenuous [hypocritical move],” she wrote. “For centuries, the British have colonized many parts of the world, and to this day they run an elite world based on a caste system. We have never colonized anyone. So, I advise you to kneel in a country where there is a demand for it. With your deceitful and ostentatious gestures of British moralization, you do nothing to undo or redeem what has been done.”

She added that Hungary has “never received anything good from the British” and accused the British Empire of harming other nations, including starving Germans after the 1918 armistice and causing the death of “millions of Indians [who] were starved to death” when grain was sent to British troops during World War II.

Schmidt told Johnson, “We will never, I repeat, never forgive you for dividing up our region with Stalin on a cheap piece of paper in the autumn of 1944 and carting us over to Asia!”

Schmidt concluded that British fans also behaved badly after their loss to Italy in the European Championship final. Moreover, both Johnson and Prince William showed bad sportsmanship by not publicly congratulating the Italian president.

Schmidt is considered to be a close friend of Hungary’s populist Prime Minister, Viktor Orbán, an outspoken critic of multiculturalism and the European Union. He has also supported the popular sport by finding ways to direct extra sources of funding to soccer clubs.

When his country was embroiled in a different soccer-related controversy over the summer, he told the media that “politics has no place in sports.” 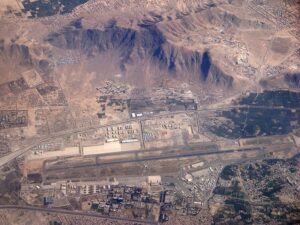 Taliban Allows 200 Americans to Leave on a Flight from Kabul