Taliban Allows 200 Americans to Leave on a Flight from Kabul

The chartered flights will fly to Qatar from Afghanistan

The Taliban agreed to let 200 Americans leave Afghanistan from the Kabul airport.

In addition to the Americans, nationals from other countries, including Germans, Hungarians, and Canadians, were also allowed to depart on the chartered flights, which were scheduled to leave on Thursday for Qatar.

Business Insider reports that “the departure is the first of its kind since the US military pulled out all its remaining forces from Kabul on August 30, surrendering control of the airport to the Taliban and ending the evacuation of American citizens and eligible Afghans. Other western countries, including the UK, ended their evacuations before the US.”

Leading up to this announcement, reports had indicated that six planes were at the Mazar-i-Sharif airport and were unable to take off.

“The Biden administration came under fire for not doing more to pressure the Taliban to allow the flights to depart,” per The New York Post.

Secretary of State Antony Blinken told reporters at the US airbase in Ramstein, Germany, “As of now, the Taliban are not permitting the charter flights to depart. They claim that some of the passengers do not have the required documentation.”

Bliken had initially denied the Taliban was holding up the planes.

“We are deeply grateful to the continued efforts of Qatar in facilitating operations at HKIA and helping to ensure the safety of these charter flights … We have been working intensely across the U.S. government to ensure the accuracy of the manifest and the safe departure and transit of the aircraft, and today’s safe flight is the result of careful and hard diplomacy and engagement,” National Security Council spokeswoman Emily Horne said via a White House statement. 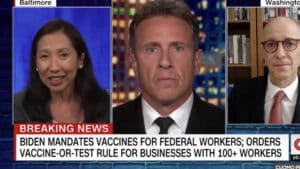