President Joe Biden said he intends to run again in 2024 — if he is in “good health.”

Biden, 79, made the remarks during an interview with ABC News on Wednesday.

Biden added, “I’m a great respecter of fate. Fate has intervened in my life many, many times.”

Biden on 2024.
Says Trump running would make him more likely to run again.
Says he plans to run “but look. I’m a great respecter of fate. Fate has intervened in my life many, many times. If I’m in the health I’m in now, if i’m in good health, then in fact I would run again.” pic.twitter.com/7G07P18Vxn

Not only does Biden welcome another race against Trump, but he also said that he would be more likely to run if the former president is his opponent.

“You’re trying to tempt me now. Sure. Why would I not run against Donald Trump if he were the nominee? That would increase the prospect of running,” Biden stated.

Both men would be in their 80s during their administration if either of them were to win in 2024.

As Timcast previously reported, White House Principal Deputy Press Secretary Karine Jean-Pierre said that Biden will be running on a ticket with Vice President Kamala Harris again in 2024 during a briefing last Friday.

When asked by the Wall Street Journal if Biden will be running again during a recent interview, Harris had offered a non-answer.

During last week’s briefing, Jean-Pierre was asked about the interview.

“I’m hoping you can clear something up here when it comes to the question of 2024. The Vice President did an interview with The Wall Street Journal. She was asked if she assumed that Biden would run again, and she didn’t say yes. She just said that the two of them hadn’t talked about it. Of course, you all and the President himself have said that he does plan to seek reelection. So what’s the disconnect here?” the reporter asked.

“I can’t speak to a conversation that the Vice President and the President has,” Jean-Pierre replied. “I could only say what and reiterate what Jen (Psaki) has said and what the President has said himself. He is planning to run for reelection in 2024. I don’t have any more to add to that.”

The reporter followed up by asking, “But just to be clear, when the President says he plans to run again, he means with Harris on the ticket?” 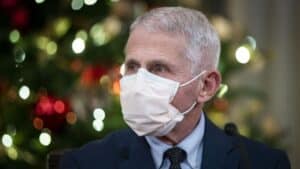 Fauci Says to 'Stay Away' From Large Holiday Gatherings, Even if You Had the Booster Shot