White House Says Biden Will Run With Harris Again in 2024

The confirmation comes amid lackluster approval ratings for Harris and near-constant palace intrigue stories about internal tension and conflict between the two leaders.

When asked by the Wall Street Journal if Biden will be running again during a recent interview, Harris offered a non-answer, saying they had not talked about it.

During Friday’s briefing, Jean-Pierre was asked about the interview.

“I’m hoping you can clear something up here when it comes to the question of 2024. The Vice President did an interview with The Wall Street Journal. She was asked if she assumed that Biden would run again, and she didn’t say yes. She just said that the two of them hadn’t talked about it. Of course, you all and the President himself have said that he does plan to seek reelection. So what’s the disconnect here?” the reporter asked.

“I can’t speak to a conversation that the Vice President and the President has,” Jean-Pierre replied. “I could only say what and reiterate what Jen (Psaki) has said and what the President has said himself. He is planning to run for reelection in 2024. I don’t have any more to add to that.”

The reporter followed up by asking, “But just to be clear, when the President says he plans to run again, he means with Harris on the ticket?”

A recent Economist/YouGov survey found that 39 percent of the people polled have a favorable view of Harris, while a 51 percent majority had an unfavorable view.

Not faring much better, Biden had the approval of just 41 percent of those polled. 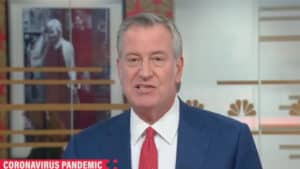 WATCH: De Blasio Says People Will Be Forced to Accept COVID Vaccines If Their ‘Paychecks Depend On It’