Trump's ban was dubbed the "gag rule" by pro-choice advocates

The federal family planning program will now run as it did under the Obama administration, according to the announcement from the Department of Health and Human Services. HHS Secretary Xavier Becerra said the aim was to “strengthen and restore” family planning services.

“Known as Title X, the taxpayer-funded program makes available more than $250 million a year to clinics to provide birth control and basic health care services mainly to low-income women, many of them from minority communities. Under former President Donald Trump, clinics were barred from referring patients for abortions, prompting a mass exit by service providers affiliated with Planned Parenthood, as well as several states and other independent organizations,” per AP News.

Assistant Secretary for Health Rachel Levine said the aim of the new policy was to expand the number of Americans using services backed by policy, “including for people of color and other historically underserved groups, as Title X subsidizes care for low-income or uninsured families,” per Forbes.

President Trump issued the ban in 2019 and was praised by social and religious conservatives alike. While federal funding cannot legally be used for abortions, clinics like Planned Parenthood still receive significant amounts of funding for other health services, including birth control and sexually transmitted disease screenings.

Title X was created under President Richard Nixon, who signed the Public Health Service Act. Since its formation in the 1970s, 41% of Title X patients — 1.6 million people — received treatment from Planned Parenthood

“Trump’s ban said clinics that used Title X money would have to refer women to prenatal care even if they planned to end their pregnancies. Despite triggering lawsuits from 23 states and every major medical organization, as well as several Title X grantees, the rule took effect everywhere but Maryland where a federal judge issued an injunction blocking its enforcement,” reports Court House News.

At an Apr. 14 briefing, White House Press Secretary Jen Psaki said it was “not an accurate depiction” of Title X to say the program forces pro-life Americans to pay for abortions.

The repeal of the so-called “gag rule” was celebrated by pro-choice advocates and family planning clinics. Notably, Planned Parenthood said the Biden Administration’s new version of Title X did not do enough to include abortion as an option for pregnant women.

Abortion rights could become a key issue during the 2022 midterms.

In May, Texas Governor Greg Abbott signed into law legislation the prohibits abortion if a fetal heartbeat can be detected after six weeks. The law sparked national outrage as well as demonstrations held in cities across the country in early October after the Supreme Court did not intervene. 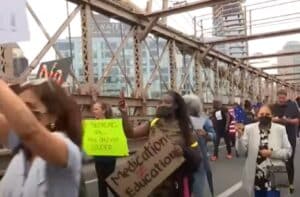 Majority of Americans Have Unfavorable View of Both Major Political Parties