A second-year Yale law student was pressured by University administrators to apologize for an emailed invitation in which he referred to his residence as a “trap house.”

The invitation was screenshotted and shared in an online forum where other second year law students said the term implied that the event was a “blackface party,” according to an exclusive Oct. 13 report from The Washington Free Beacon.

Within 12 hours, the student, who requested anonymity out of fear of reprisal, was called into the law school’s Office of Student Affairs. There, associate dean Ellen Cosgrove and diversity director Yaseen Eldik said they had received nine discrimination and harassment complaints about the email.

The administrators went on to inform the student, a Native American, that his email contained additional problematic contents.

The Sept. 15 invitation, which the student sent to fellow members of the National Native American Law Students Association (NALSA), advertised a “Constitutional Day Bash in collaboration with FedSoc” — the Federalist Society, which is comprised of conservatives and libertarians who advocate for textualist interpretations of the U.S. Constitution.

The student announced that “basic-b——-American-themed snacks” — like Popeye’s chicken and apple pie — would be provided at the “Trap House’s inaugural mixer.” 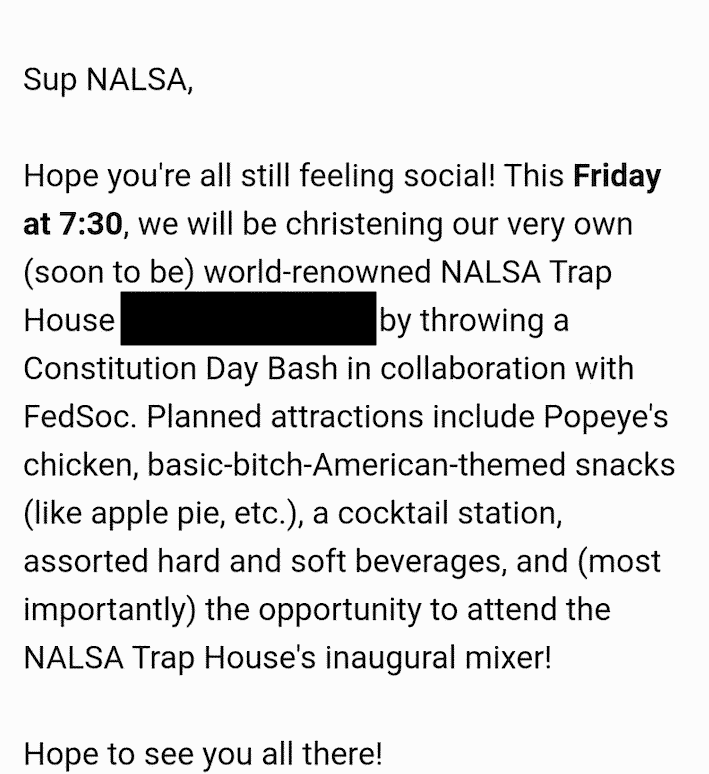 While “trap house” originally referred to “drug houses,” it has transformed into a generic slang term with flexible interpretations. According to Urban Dictionary, it has “since been abused by high school students who like to pretend they’re cool by drinking their mom’s beer together and saying they’re part of a ‘traphouse.’” The term gained increasing popularity following the 2016 release of the socialist podcast, “Chapo Trap House.”

According to the student’s recording of a Sept. 16 meeting obtained by the Free Beacon, Cosgrove and Eldik informed him that the the word “trap … connotes crack use, hip hop, and blackface.”

Furthermore, Eldik said those “triggering associations [were] compounded by the fried chicken reference [which] is often used to undermine arguments that structural and systemic racism has contributed to racial health disparities in the U.S.”

Eldik, who served on the White House’s Office of Faith-Based and Neighborhood Partnerships under the Obama administration, said the student’s membership in the Federalist Society also posed a problem:

“The email’s association with FedSoc was very triggering for students who already feel like FedSoc belongs to political affiliations that are oppressive to certain communities. That of course obviously includes the LGBTQIA community and black communities and immigrant communities.”

The administrators suggested more than once that if the student didn’t apologize, he might face consequences that could include “trouble with the bar exam’s ‘character and fitness’ investigations, which Cosgrove could weigh in on as associate dean,” the Free Beacon reported.

Eldik added: “I worry about this leaning over your reputation as a person. Not just here but when you leave. You know the legal community is a small one.”

At the same time, Eldik suggested that the student’s ethnicity might grant him some clemency.

“As a man of color, there probably isn’t as much scrutiny of you as there might be of a white person in the same position,” he said.

The student declined Eldik’s recommendation to issue a formal apology to Yale’s Black Law Students Association to “make this go away.” When the student offered to have a personal meeting with anyone offended by his email, Eldik nixed the idea.

“I don’t want to make our office look like an ineffective source of resolution,” he said.

Nevertheless, Eldik wrote an apology letter for the student to send out as a sign of “character-driven rehabilitation.”

The letter apologized to black student leaders for “any harm, trauma, or upset. … I know I must learn more and grow …[and] I will actively educate myself so I can do better.”

The student did not send the note, but welcomed a conversation with any classmates who took issue with his invitation.

In lieu of a formal apology, Cosgrove and Eldik sent an email to the entire second-year class wherein they “condemned [the email] in the strongest possible terms” due to its “pejorative and racist language.”

On Oct. 12, the administrators met with the student once again to reassure him the incident wouldn’t interfere with his bar exam.

“We would never get on our letterhead and write anything to the bar about you,” Eldik said. “You may have been confused.”

Yale Law School’s Office of Public Affairs did not immediately respond to Timcast’s request for comment. 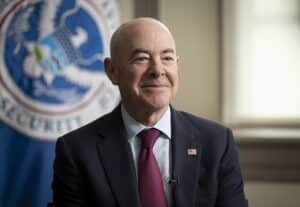