An unpublished report from House Republicans and the State Department evaluating the Biden administration’s withdrawal from Afghanistan has been denounced by the White House.

In addition to the United States citizens, a State Department spokesperson told Politico that roughly 600 legal permanent residents of the U.S. have been evacuated in the year since America left Afghanistan.

The week after the withdrawal, Secretary of State Antony Blinken had said only 100 American citizens who want to leave had been left behind.

The report was created by the Republican staff of the House Foreign Affairs Committee. The committee’s top Republican, Congressman Michael McCaul of Texas, reportedly hired Ryan Browne, a former CNN Pentagon reporter and former embedded contract adviser to the Afghan National Army, to lead the investigation.

“There was a complete lack and failure to plan. There was no plan and there was no plan executed,” McCaul said on CBS News’s “Face the Nation” on Aug. 14. McCaul and his Republican associates have said the report, titled “A Strategic Failure: Assessing the Administration’s Afghanistan Withdrawal,” will be released this week.

The Taliban took over Afghanistan four months after President Joe Biden had announced he would completely withdraw American military force from the nation by Sept. 11.

“We cannot continue the cycle of extending or expanding our military presence in Afghanistan — hoping to create ideal conditions for the withdrawal and expecting a different result,” Biden said during his announcement.

“Biden’s decision effectively turned Afghanistan, a country roughly the size of Texas, over to the Taliban, a ruthless terrorist organization that continues to house and collaborate with al Qaeda, the organization responsible for planning and carrying out the 9/11 attacks against the United States,” wrote Oklahoma Senator Jim Inhofe for Foreign Policy. “His administration refused to expedite the evacuation of U.S. citizens and Afghan partners because it feared this would signal a lack of confidence in the Afghan government.”

As major cities fell under the Taliban’s control, the situation on the ground became increasingly chaotic over the course of two weeks. A suicide bombing at the Kabul airport led to the death of 13 service members, 11 Marines, one Army soldier, and one member of the Navy. Additionally, 160 Afghans died in the blast.

The incident is described in the reports as a “powder keg” that “exploded with the chaotic scenes that reverberated around the world, including images of Afghans falling to their deaths.”

“The Biden administration had largely wasted the four months since the president announced the full withdrawal, failing to adequately plan for the anticipated Taliban takeover,” the committee wrote, per Fox News.

Axios has obtained a memo authored by National Security Council spokesperson Adrienne Watson that is intended to “preempt” criticism that the Biden administration will likely face in the wake of the report’s publication.

“This partisan report is riddled with inaccurate characterizations, cherry-picked information and false claims,” Watson wrote in the document. “It advocates for endless war and for sending even more American troops to Afghanistan. And it ignores the impacts of the flawed deal that former President Trump struck with the Taliban.”

The memo largely attributed the problems in Afghanistan to Trump, saying the previous administration’s drawdown “empowered the Taliban and weakened our partners in the Afghan government.” Watson wrote that “President Trump’s presidency damaged America’s reputation and left us increasingly isolated internationally.”

The committee Republicans are expected to subpoena documents related to the withdrawal from the State Department if their party takes control of the House during midterm elections in November. 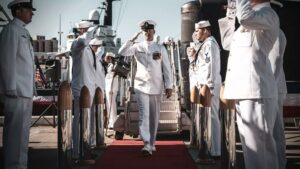