Psaki was asked about the president’s comment during Tuesday’s briefing.

The hot mic moment took place during a photo op with the White House Competition Council on Monday and was written into the official White House transcript.

Biden: What a stupid son of a bitch pic.twitter.com/K8H74Vfv8m

Doocy told Sean Hannity that Biden called him after the outburst, but did not say that he apologized.

CBS News Radio White House correspondent Steve Portnoy brought up the “elephant in the room” during the briefing on Tuesday, asking if Biden regretted the remark.

“Forgive me, it’s sort of the elephant in the room,” Portnoy said. “Many people in the country were talking about last night this morning.”

“Does the president regret saying what he said about Peter? Can you shed some light if you have had any conversations with him today about what happened last night?” the reporter asked.

Watch Psaki uncomfortably squirm on LIVE TV when she gets asked about Biden calling Peter Doocy a “Stupid Son of a B*itch” for asking about his inflation crisis pic.twitter.com/p95ipuNZUV

Psaki appeared uncomfortable as she attempted to answer the question.

“Well, I would say what’s most important, and it’s, Peter’s sitting here. So this is kind of a funny thing. But the president, the president called Peter, and he [Doocy] confirmed that. So this is only why I’m speaking to this. And if you have private conversations with the president, I will assure you I’m not going to convey that on your behalf,” Psaki replied.

“Peter spoke to this. The president called him. He conveyed to him that it was ‘nothing personal, man’ and also acknowledged that all of you were going to ask him a range of questions. So I think that speaks for itself,” Psaki continued. 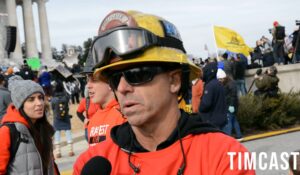