Maryland’s next governor will be a Democrat.

Incumbent Governor Larry Hogan, a Republican, could not seek reelection due to term limits.

Moore defeated the Obama administration Labor Secretary Tom Perez to secure the Democratic Party’s nomination. His campaign has had support from high-profile names, including Oprah Winfrey and director Spike Lee.

“Maryland has voted Democrat in every presidential election since 1992 and saw its highest percentage of voters turn out blue in the 2020 election where President Biden won by 65 percent of the vote,” per Fox News.

Cox won his party’s primary in July by 16%. A Constitutional attorney and vocal supporter of President Donald, Cox was regarded by some as the more extreme choice. His campaign focused on America First, pro-liberty messaging.

Ahead of the primaries, the Democratic Governor Association spent $1.16 million on television advertisements to support Cox’s campaign because the organization believed he would be easier for a Democratic candidate to beat during the November general elections.

Cox had an adversarial relationship with incumbent Governor Hogan, who he tried to impeach for “malfeasance in office, misuse of police power, violations of the separations of powers, theft of the people’s Liberty and property, deprivation of the religious liberties of the people, and abuse of power under false pretenses.” Cox also sued Hogan over his pandemic-era stay-at-home orders.

Moore called his Republican opponent “an extremist election-denier whose rhetoric and his policies are not only dangerous and divisive, but will take [Maryland] backwards.”

Other gubernatorial candidates in Maryland included David Lashar, of the Libertarian Party; Nancy Wallace, of the Green Party; and David Harding, of the Working Class Party. 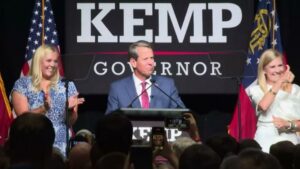 FiveThirtyEight: Kemp Has 94-In-100 Chance of Winning Georgia Gubernatorial Race