Three key primary races unfolded last week and decided the fates of three Republican members of Congress who voted in favor of impeaching President Donald Trump. Leading up to this evening, some commentators had been approaching these three contests as a measure of Trump’s influence — each of the three races included a Trump-backed challenger.

In Michigan, Representative Peter Meijer fell to Trump-backed challenger John Gibbs. In Washington, similar pain was felt by Dan Newhouse, an incumbent who also campaigned for a return to D.C., was the only one to survive the primary challenge.

Ultimately Kent succeeded in defeating the six-term Republican, pulling far enough ahead that the results could be officially declared.

While all Republican impeachment voters received praise from Democrats, Herrera Beutler stands out from the others who ran for office last week. The six-term congresswoman was lauded with praise when she voted in favor of impeachment and earned profiles in publications like Politico after she claimed Kevin McCarthy suggested Trump was supportive of the mob.

Kent, for his part, earned Trump’s endorsement and was treated to a fundraising event at Mar-a-Lago. The candidate has also been frequently featured on Fox News and received financial backing from Peter Thiel.

But, in a brief statement to Timcast before the polls closed on primary night, Kent was hopeful and confident “in the hard work that my team put in over the last 18 months. We’ve been in the lead because people are ready to cast off the failed establishment. That’s why the D.C. machine pumped $4.2 million against me in the last two weeks — they fear the people’s awakening,” he said.

Washington utilizes an open primary system where voters are not required to register with a specific party and all candidates are set on the same ballot. Once the votes are tallied, the two candidates with the most votes — regardless of party membership  — proceed to the general election.

Already disadvantaged by a tight field of four Republicans splitting the vote, the Kent campaign was further waylaid by Herrera Beutler’s team’s last minute decision to tweak the campaign rhetoric to target Democrat voters who might be more likely to vote for her.

Kent’s path to a primary victory was more uphill than most. Despite receiving support from Trump and Thiel, Kent has been plagued with negative reports in the press throughout his campaign. Last week, the Associated Press — and outlets such as the Washington Post, which republishes AP coverage through a syndication deal — released an article, “GOP’s links to extremism surface in a congressional primary,” which positions Kent as an associate of white nationalists.

The basis for this allegation comes from a conference call in which Nicholas Fuentes, an internet commentator who some find incendiary, participated. Kent was holding the call for his campaign which was exploring expanding its social media outreach, but nothing materialized from that call. Instead of becoming allies, the two mutually disavowed each other, with Fuentes calling the candidate “delusional” for believing in “inclusive” populism. In other words, Kent was not willing to consider race as a factor in his platform.

How this constitutes proof that Joe Kent has links to extremism, the AP journalist did not explain, nor did he explain why one candidate’s baggage confirms an institutional link to extremism.

Kent is a veteran operator who served in 11 combat deployments before retiring from the military and joining the CIA. In 2019, his wife, Shannon, was killed by an Islamic State suicide attack while she was serving in the Navy as a cryptologist.

Ten Republican Congressional representatives voted to impeach Donald Trump. Perhaps sensing that the political headwinds were not in their favor, four legislators opted not to pursue reelection. In South Carolina, Rep. Tom Rice lost his primary campaign. In California, Rep. David Valadao benefited from California’s unique primary system where candidates from both parties appear on a single ballot. The final impeachment voter, Rep. Liz Cheney, will receive her judgement from voters in August.

Editor’s Note: The original title of this story has been revised, with the term “nail-biter” being replaced with the word “close” to guard against any implied editorializing 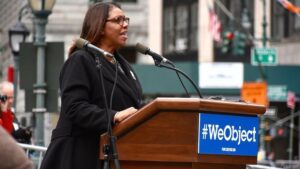