Harris had previously held higher approval ratings than the president

While President Biden’s approval rating has declined to 38%, a mere 28% of the respondents approved of Harris’s efforts thus far.

The poll’s findings indicate she is less popular than previous vice presidents Mike Pence, Joe Biden, Dick Cheney and Al Gore were at this point in their terms.

According to SF Gate, “Harris’ flagging numbers reportedly have some of her allies worried about a ‘difficult, messy’ primary fight in 2024 if Biden does not run again. That primary would likely be against Transportation Secretary Pete Buttigieg, Harris allies believe.”

Americans’ dissatisfaction with the vice president has been documented by other organizations, despite leading the president in approval polls for nearly nine months, according to Gallup.

A Convention of States Action/Trafalgar Group survey in October revealed approximately 75% of voters felt Harris had done a poor job with the southern border crisis.

As of Oct. 29, YouGov reported 51% of registered voters regarded Haris unfavorably. An unfavorable opinion of the vice president was held by 11.5% of Democrats, 89.2% of Republicans, and 61.6% of independent voters surveyed.

Biden’s support among independents — who have been credited with securing his victory over President Donald Trump in the 2020 election — has significantly dipped. Most independents (44%) think Biden has done a worse job than they expected him to as president.

This sentiment was shared by 46% of those surveyed, including 16% of those who voted for him. If elections were held today, 46% of those polled said they would vote for a Republican over a Democrat.

By comparison, Trump’s approval rating only dipped to 38% during the final days of his Presidency, following the controversial events at the Capital on Jan. 6.

Biden’s “Build Back Better” bill does not appear to be his ticket out of low approval ratings. Americans are almost evenly divided on the $1.85 trillion legislation, with 47% in support and 44% opposed. Just 1 in 4 reported their families would be helped by the bill’s provisions.

At least two-thirds of the country (66%) expressed that the U.S. is on the wrong track. Around 64% of respondents did not want Biden to see a second term.

“Republicans hold a clear lead on the congressional ballot,” noted USA Today in its coverage of the poll’s results. 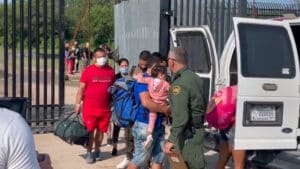 REPORT: DOJ Will Determine How Much Money to Pay Migrant Families Separated at Southern Border