Most Americans think Vice President Kamala Harris has done a poor job with the southern border crisis, according to a new poll.

According to a poll from the Convention of States Action, in partnership with The Trafalgar Group, Harris’s handling of the crisis is widely regarded as ineffective.

The groups polled 1,000 likely 2022 election voters from Sept. 29 through Oct. 1. The survey found 74.9% of voters believe Harris has done a “poor job with the southern border crisis since President Biden put her in charge in March of 2021.”

Less than 13% of voters believe she has done an excellent job.

Moreover, the negative opinion has bipartisan support. The majority of Democrats (54.6%), Independents (80.3%), and Republicans (93.7%) called Harris’s handling of the border “poor.”

“These numbers signal clearly that the American people see Vice President Harris’ management of the southern border crisis as an unmitigated disaster,” said Mark Meckler, President of Convention of States Action. “The Biden Administration is bungling this crisis beyond what most people could have imagined. Once again, the solution is strong leadership from governors and state legislators who care about their constituents and are not confused as to who is in charge: the people who voted them into office.”

The data was published the same week that 16 Republicans on the House Homeland Security Committee sent a letter to President Biden and Secretary of Homeland Security Alejandro Mayorkas saying they failed to acknowledge the severity of the border crisis, which is now “out of control.”

“It is time to admit that there is a crisis at the southern border and that the men and women of the United States Border Patrol are overwhelmed,” they wrote. “It is time for your Administration to take appropriate steps to prevent a recurrence of what we witnessed in Del Rio, Texas. We demand transparency from your Administration on behalf of the American people.”

“This is unconscionable,” Sen. Ted Cruz (R-Texas) told reporters on Oct. 6. “And Joe Biden and Kamala Harris caused it. The way to fix it is reverse the political decisions they made on Jan. 20 of this year, they could do it and fix it. It is only partisan politics that prevents them from doing so.”

“I can think of nobody who’s better qualified to do this,” Biden said during an announcement at the White House. “When she speaks, she speaks for me.”

Senior white house officials told Bloomberg the move was meant to highlight the vice president’s leadership skills and her law enforcement experience. It was the first issue she was asked to publicly lead.

During the first five months of 2021, US Customs and Border Protection (CBP) made 711,784 apprehensions along America’s southern border. The agency is projected to make over 1 million this year. 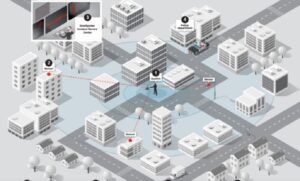