New gun regulation in Oregon that would establish a permit-to-purchase system may be prevented from going into effect following lawsuits from multiple pro-second amendment organizations.

The Oregon Firearms Federation, the National Rifle Association and the Second Amendment Foundation are challenging the measure

Oregon voters narrowly passed Measure 114 on Nov. 8 by less than 2% with just 25,000 votes. The measure requires those looking to purchase a gun to get a permit. To obtain the permit, a state resident would need to pay a $65 fee, submit a full set of fingerprints to the state, and complete a mandatory training course. Permit applicants would also submit a photo and undergo a federal background check. Local police chiefs, county sheriffs or other designated law enforcement officers would be tasked with processing these permits.

Permits will expire after five years.

The measure also prohibits magazines that hold ten rounds of ammunition or more, unless they are owned by police or military personnel.

“The change will rocket Oregon from the middle of the pack to among the 10 states with the tightest gun regulations in the country,” reports OPB.

While the measure was originally intended to go into effect 30 days after the votes were certified, the Oregon Secretary of State informed state law enforcement agencies that Measure 114 would go into effect on Dec. 8, 2022. This increased the sense of urgency felt by opponents of the measure.

“As you can imagine the accelerated date of implementation left us with far less time to act in court. Having to respond to a measure that somehow was declared ‘certified’ while the votes were still being counted was, to say the least, unprecedented,” the organization noted in a message to its followers.

The NRA has argued there is no system established to manage the permit-to-purchase program which will make it almost impossible for individuals to exercise their Second Amendment right to acquire a firearm.

“One might think that a state bent on imposing such a novel and burdensome permitting regime would at least take the time to make sure it had the infrastructure and resources in place to ensure that it would operate as smoothly as possible,” read the NRA’s lawsuit. “But Oregon is not even willing to do that. Instead, the state has rushed the effective date of its new law to December 8, 2022—before the vote on Measure 114 has even been certified, and before the mechanisms to comply with it will be anywhere close to in place.”

The Second Amendment Foundation has asked that, because the law is set to go into effect so soon, the U.S. District Court in Portland grant a declaratory judgment and an injunction.

“Maybe the most frustrating thing about the Oregon measure is that officials there are willing to enforce the law’s provisions despite any real prospect this law is going to reduce violent crime,” Alan M. Gottlieb, the SAF’s founder and Executive Vice President, said in a statement. “The only people actually impacted are law-abiding citizens who don’t commit crimes, and who will be left more vulnerable to attack because of this new law.”

The three legal challenges are being supported by both pro-gun rights organizations and firearm-related businesses. This includes the Mazama Sporting Goods, the National Shooting Sports Foundation, and the Oregon State Shooting Association.

Those who lobbied in favor of Measure 114 have said restricting who can purchase a gun will reduce gun violence such as mass shootings as well as suicides – 82% of which are committed with a gun in Oregon.

Oral arguments in the case brought by the Oregon Firearms Federation are scheduled to be heard on Dec. 1. Court dates for the other lawsuit have yet to be determined. 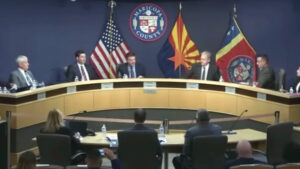