The Army announced their plan to implement mandatory vaccines for all soldiers in a statement on Tuesday.

Defense Secretary Lloyd Austin announced that they would be mandating vaccines for service members last month, but only if they are approved by the U.S. Food and Drug Administration.

“Mandatory vaccination against COVID-19 will only use COVID-19 vaccines that receive full licensure from the Food and Drug Administration (FDA), in accordance with FDA-approved labeling and guidance,” the Pentagon said in a statement about the order last month.

“To defend this Nation, we need a healthy and ready force. After careful consultation with medical experts and military leadership, and with the support of the President, I have determined that mandatory vaccination against coronavirus disease 2019 (COVID-19) is necessary to protect the Force and defend the American people,” Austin’s memo read.

According to Tuesday’s announcement, active-duty soldiers now have until December 15 to take it or face administrative or non-judicial punishment, including relief of duties. Reserve and National Guard members have a little longer to get it done, with a deadline of June 30, 2022.

“While soldiers who refuse the vaccine will first be counseled by their chain of command and medical providers, continued failure to comply could result in administrative or nonjudicial punishment—to include relief of duties or discharge from the service,” the guidelines state.

Soldiers will be able to request an exemption from receiving the vaccine for medical, religious, or administrative reasons. The Army has said that they will not be subject to punishment until their request has been considered.

“Soldiers may request administrative or medical exemptions as outlined in Army Regulation 600-20 and AR 40-562, as well as the new Army Directive 2021-22 that provides supplementary guidance on exemption requests,” guidance about the vaccines stated. 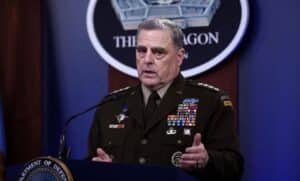 Trump Says That if 'Dumb-ss' Gen. Mark Milley Worked With China He Should Be Tried for Treason