Protests also took place at two other nearby restaurants

Four people were arrested at an Applebee’s in Queens while protesting New York City’s vaccine mandate for restaurants.

New York City requires gyms, restaurants, and other indoor businesses to require patrons to show proof they are fully vaccinated before entry.

Video of the Dec. 15 incident shows New York Police restraining protestors at the restaurant located in the Queens Center Mall. A crowd gathered around them, chanting “no more mandates.” In other footage, the crowd shows anti-mandate protestors chanting “Shame on you” at the officers.

#BreakingNews multiple protesters against mandates were just arrested at Applebee's in queens NY for trying to order food at a vaxed only restaurants pic.twitter.com/adZ0qJybwC

After Protesters against mandates were arrested at the Queens center mall for doing a sit in Applebee's Protesters started changing " SHAME SHAME " to the #NYPD#BreakingNews #Breaking_News pic.twitter.com/ZzWyK5TiRg

“Can’t work, can’t eat,” said one woman in the recording as she was handcuffed. “I want to eat. You guys are busting me over this bull—-.”

According to Business Insider, “the Applebee’s protest came a day after six people were arrested at a Cheesecake Factory located in the same mall as the Applebee’s on Tuesday night. The group was asked to show proof of vaccination as required by New York’s vaccine mandate rules, but refused.”

The “sit-in” at The Cheesecake Factory was organized by New York Freedom Rally, which shared a flyer for the event on its social media pages. The group also shared videos of the arrests on Instagram.

In one recording, a protestor can be heard telling an officer that they are there to “access the business during normal business hours” and that they were not “committing a crime.”

One of the people arrested compared the police to Nazis. An antivaxxer responds, “we’re going to sue every last one of these MFers.” Others claim this is “discrimination” and “segregation” as the trespassers are loaded into an NYPD vehicle. pic.twitter.com/vkp6w34VLA

Alethea Rowe, senior director of public relations for Cheesecake Factory, called the protest and arrests an “unfortunate incident” in a statement.

“The company is simply complying with the local ordinance concerning Covid-19 vaccine requirements,” Rowe said. “We would like to thank our restaurant managers and staff for remaining focused on providing our guests with delicious, memorable food, and would like to thank local law enforcement for their support during this time.”

The same mall also had protestors rush into a Shake Shack without showing their vaccination cards. Videos of the incident were posted to Twitter.

The NYC antivaxxers have decided to target Shake Shack at the Queens Center Mall. They refused to show vaccination cards and rushed into the roped off dine-in section with their to-go orders.

If you look through the window, police are outside Cheesecake Factory. pic.twitter.com/1mhB6qHyJz

The NYPD has been criticized for their arrest of the Applebee’s protestors, whose action some says are less destructive than political protests held in 2020.

“During Black Lives Matter protests in New York City, police officers frequently did not respond to looting, protesting, rioting, or sometimes loud and often violent demonstrations inside city businesses,” wrote Shore News Network, adding that the department had not returned a request for comment.

Most of the circulating videos were captured by independent New York-based photographer Leeroy Johnson.

“NYC is turning in to Australia. Why are the NYPD getting involved in mandates while their union is fighting the same mandate?” he wrote on Twitter.

New York City mandated police to get the COVID-19 vaccine by Oct. 29. Over 6,500 officers have filed requests for medical or religious exemptions.

The Police Benevolent Association, the largest police union in the city, sued the department for sending out generic rejections and not properly reviewing and informing officers about their exemption status. The union seeks to stop exemption processing until a judge can review the protocol. 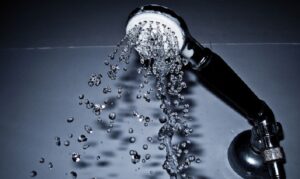