University of Alabama basketball player Darius Miles has been charged with capital murder.

Miles, 21, and Michael Lynn Davis, 20, have both been charged over a shooting early Sunday morning that left 23-year-old Jamea Jonae Harris dead.

The shooting took place near the Bryant-Denny Stadium in Tuscaloosa after 1:30 a.m.

When police arrived at the scene, the driver of the vehicle that Harris was in said that the suspects had fired into the car and killed her.

The driver said that he had returned fire and thought that he had hit one of the suspects.

“After speaking with witnesses and viewing video surveillance, police were able to develop and locate suspects, one of which had indeed been struck by gunfire and had non-life-threatening injuries.,” local station WBRC reports.

Police believe that the shooting resulted from a minor argument that had occurred when the suspects and victims had crossed paths in the street. Harris was not affiliated with the University of Alabama.

The University of Alabama athletics department confirmed to the station that Miles is no longer on the team and offered “deepest sympathies to the family and friends of the victim from last night’s incident.”

The university itself also issued a statement about the shooting.

“The University of Alabama’s utmost priority is the safety and well-being of the campus community. We are grieved by the incident that occurred near campus last night and extend our deepest condolences to the victim’s family and friends,” the statement began.

“We are grateful for the quick and thorough response of law enforcement and emergency response teams, and we will continue to fully support the ongoing investigation,” the statement continued. “We were made aware of the recent charge against student-athlete Darius Miles; he has been removed from campus and is no longer a member of the Alabama men’s basketball team.”

The statement concluded, “The University offers comprehensive emotional and mental health support resources. Through the holiday, members of the campus community can call UAPD at 205-348-5454 to reach the dean for support or to connect with emergency counseling services. On weekdays, the Counseling Center is available for students at 205-348-3863. Student Care and Well-Being can be reached at 205-348-2461, and faculty and staff have access to the Employee Assistance Program by calling 800-925-5327.”

Miles and Davis are currently being held without bond. 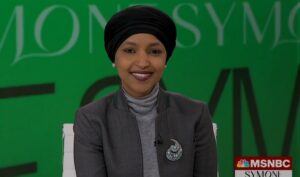 Rep. Ilhan Omar Says She is 'Glad' a Special Counsel Has Been Appointed to Investigate Biden's Classified Docs (VIDEO)