Two of four regional bodies of the United Methodist Church in Texas agreed to permit 439 congregations to disaffiliate during a meeting on Dec. 3. In total, about 45% of Methodist churches in Texas are now leaving the UMC.

Leggett said his church members want to be removed “from the dysfunctional fighting going on in The United Methodist Church so that we can fully devote our energies to fulfilling the mission and vision that God has given to us.”

Like all sects of Protestantism in America, the Methodist church has experienced a consistent decline in membership for decades. The Pew Research Foundation found that between 2007 and 2014, the percentage of the American adult population affiliated with the Methodist church declined from 5.4% to 3.9%

Although UMC leadership has consistently struck down motions to end its ban on same-sex marriage over the last 40 years, pressure to formally add acceptance for gay marriage into church doctrine persists.

“Gay rights advocates within the church … have not capitulated,” PennLive wrote in 2013, when a pastor at Zion United Methodist Church conducted a marriage between his gay son and another man in 2006 in violation of church law. “Increasingly, a growing number of pastors and congregants continue to call for marriage equality in their church and even test the limits of church regulations.”

Discontent and disagreement over the definition of marriage are further deteriorating the already hemorrhaging religious sect.

Since the UMC approved a disaffiliation procedure in February 2019 at a special General Conference, at least 1,300 churches have left. While that number represents just 4% of the 30,500 UMC churches in America, the loss carried a financial burden.

The UMC relies on local churches to provide the bulk of its funding. As of November 2021, the church’s General Administration Fund had about $269.9 million to distribute throughout its budget — 42.3% less than the budget at the General Conference held four years earlier.

Now, with the latest vote in Texas, the exodus from the UMC does not appear to be subsiding.

Notably, the UMC has also lost some of its churches for not formally embracing same-sex marriage.

Four congregations in Maine cut ties with the UMC in April of 2019, citing the UMC’s “discriminatory” practice “toward LGBTQ community members.” The churches had previously been a part of a “non-conformity” resolution passed in 2016 by the UMC’s New England Conference wherein all congregations within the region refused to “comply with discriminatory provisions that excluded LGBTQ persons,” per the Bangor Daily News.

Allowing same-sex marriage is expected to once again be a part of the UMC’s General Conference in 2024, which is scheduled to be held in Charlotte, North Carolina. 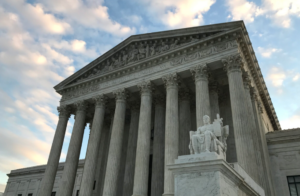 Supreme Court Declines to Hear Case Against Facebook and Dominion