The emergency situation prompted the mass transit system to shut off power on various subway lines — stranding many of the 4.3 million people who rely on the public transit system for their commutes.

fare surge after a mass shooting in brooklyn when subways are shut down. shame on you @Uber pic.twitter.com/1qoKlPJhl3

Lyft temporarily suspended their “Prime Time” pricing citywide following user complaints on social media. They told the New York Post that they would be issuing partial refunds for those who faced price hikes in the immediate aftermath of the shooting.

Uber only suspended their price hikes in Brooklyn, where the shooting took place. A spokesperson for the company told the Post that they were putting a “cap” on the prices, but did not specify an amount or how long the cap would be in place. The report noted that as of 4:40 p.m., an Uber trip from Sunset Park to Manhattan still cost more than double the price of a similar trip using Lyft.

“Following the incident, Uber disabled surge pricing in the vicinity and capped pricing citywide,” Uber spokeswoman Freddi Goldstein told The Post. “If anyone on our platform experienced unintended charges during this emergency, we will work to get them refunded.”

“Our hearts go out to the victims of this morning’s terrible shooting in Sunset Park,” she added. “As always, Uber strives to be a resource for New Yorkers aiming to get around New York City.”

Didnt see anything about ‘Shooting Surge Pricing’ in @lyft terms of use pic.twitter.com/99MkFqp8py

Aside from many of the lines being shut down, the shooter remains at large, which has left many uncomfortable about the prospect of boarding their next train.

⁦@Uber⁩ turn off surges in sunset park. People are scared, let them get out safely pic.twitter.com/e31KIPE3ND

“I’m pretty scared to take the subway,” a Midtown office worker who identified herself as Tricia told the Post. “Luckily, my boss is letting my team expense Ubers [and] Lyfts home today.”

Police have identified Frank R. James, 62, of Philadelphia as a person of interest in the case.

Anyone with information about James’ location is asked to call Crime Stoppers at (800) 577-TIPS. 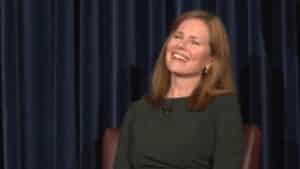 Justice Amy Coney Barrett Responds to Pro-Abortion Protester, Says She is Used to Outbursts Because She Has Seven Children