The United States Navy will name a replenishment oiler after the late Supreme Court Justice Ruth Bader Ginsburg in honor of her women’s rights and gender equality advocacy.

Ginsburg was a key proponent of ending the Virginia Military Institute’s male-only admissions policy in the 1996 case Unites States v. Virginia, writing the majority opinion for the Court.

“She is a historic figure who vigorously advocated for women’s rights and gender equality,” said Secretary of the Navy Carlos Del Toro in a March 31 statement, noting the announcement came at the end of women’s history month.

“As Secretary of the Navy, it is my aim to ensure equality and eliminate gender discrimination across the Department of the Navy,” Del Toro added. “She is instrumental to why we now have women of all backgrounds, experiences and talents serving within our ranks, side by side with their male Sailor and Marine counterparts.”

The future USNS Ruth Bader Ginsburg will be a John Lewis-class replenishment oiler. The vessel’s class was named for late U.S.Representative John Lewis, who has been celebrated as a leader in civil rights.

“The oilers transfer fuel to the Navy’s operating carrier strike groups and can hold 162,000 barrels of oil,” notes Reuters.

Following Sandra Day O’Connor, Ginsburg was the second woman to serve on the supreme court. She was nominated in 1993 by President Bill Clinton.

Ginsburg died in September 2020 at the age of 87 while still serving on the bench.

The announcement was the Navy’s latest effort to honor a late activist.

In 2021, the Navy launched a Military Sealift Command fleet oiler named in honor of gay rights activist Harvey Milk. Milk had to resign from service in 1955 after being found by his supervisors in a park frequented by gay men.

The USNS Harvey Milk is also a John Lewis-class replenishment oiler. Other vessels in this class have been named for Sojourner Truth, Lucy Stone and Robert F. Kennedy. 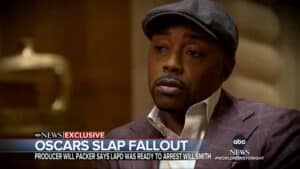 Oscars Producer Claims Police Were Ready to Arrest Will Smith