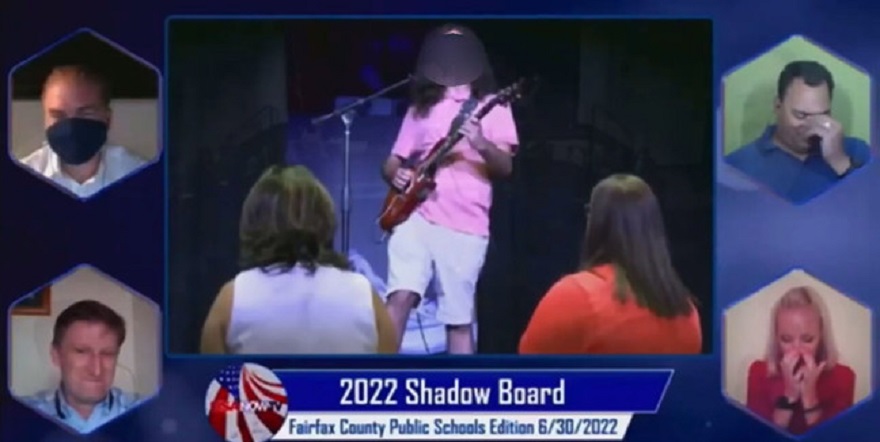 Two Fairfax County School Board candidates have dropped out of the race after facing backlash for laughing at an autistic student with autism who was singing the National Anthem.

Republican candidates Stephanie Lundquist-Arora and Harry Jackson were livestreaming their reactions to a school board meeting last week when the incident took place.

In a statement about dropping out of the race, Lundquist-Arora wrote that she has been a victim of members of the “far-right” who did not think she was going far enough in her opposition to transgender children.

“At a meeting of the local GOP, one far-right adversary waved a copy of a book I had written, advocating compassion for children navigating issues of possibly being transgender. I was too “far left” for her and her few allies,” Lundquist-Arora wrote.

The statement continued to say “to be sure, I messed up on another front. I inappropriately laughed at a singing of the National Anthem that caught me off guard while I was livestreaming something other parents and I call the ‘Shadow Board,’ analyzing in real-time our school board meetings. I didn’t know anything about the singer but was jolted toward the end of the meeting with the singing. Turns out, our video producer accidentally played an old meeting at the end of our meeting. A local far-right adversary waged a campaign against me as ‘laughing at an autistic student.’ I didn’t know anything about the singer.”

Ultimately, the candidate said, “being the target of constant political and personal attacks comes at too high of a price. It significantly distracted me from my family – my raison d’etre.”

“For that reason, this week, I formally withdrew my candidacy, but I will remain part of the bipartisan fight to improve education,” the statement continued. “To me, it was never about my candidacy, only the cause and the team. Though the Fairfax County Republican Committee has not endorsed any candidates yet, I believe it is the party standing for educating our children in Fairfax County. The Democratic Party notably endorsed all of the 12 current school board members (some without children) – all responsible for closing our schools for a year-and-a-half, as well as all of the academic decline and psychological issues that resulted in children from the irresponsible closures.”

Jackson quietly withdrew from the race earlier in the week.