Two 14-Year-Olds Stabbed Outside of High School in New York, Continuing Trend of Youth Stabbings in US

Two teenagers were hospitalized on Wednesday afternoon after being stabbed outside of their high school in New York.

The victims were attacked at Harry S. Truman High School in the Bronx between 2 P.M. and 3 P.M. The Department of Education is reportedly working closely with the NYPD to investigate the crime.

The boy was stabbed in the face or neck and was bleeding heavily, police sources said told The New York Post. Details about the condition of the second victim, a girl, were not made public.

Both victims are 14 years old. They were hospitalized at Jacobi Hospital and are expected to recover.

Police told the media that charges are now pending against the attacker, who was taken into custody at the scene.

This was the second stabbing incident at this high school during the past two weeks.

On Sept. 21, a man stabbed a teenager outside the school.

“According to preliminary information from the NYPD, it is believed that a 17-year-old — who does not go to the school — was with a group of men inside a BMW in front of the school when a fight broke out and the teenager was stabbed in the torso. The teen fled into nearby P.S. 178 for safety,” Spectrum News.

The driver of the BMW then sped away, hitting pedestrians surrounding his vehicle.

The car then jumped the street’s divider and hit a Chrysler PT Cruiser. The BMW’s driver left his car and fled the scene.

At least six people were injured in total.

Terrel Rucker, an after-school counselor at nearby P.S. 153, said the area is typically bustling during afternoon dismissal.

“It’s a high school, so there’s a lot of people that go there,” he said. “It gets busy, but I’m surprised. That doesn’t usually happen.”

Lewis, who was 14 at the time, was charged with second-degree murder and first-degree robbery. Two other teens have been charged in connection to Majors’ death.

The murder occurred in Manhattan’s Morningside Park on December 11, 2019.

Another school stabbing occurred on Wednesday at Annapolis High School in Maryland.

Two students were stabbed as part of a possible retaliation attack that, according to Anne Arundel County Police Department spokeswoman Lt. Jacklyn Davis, originated away from school property.

“One person had a knife, and two people went to the hospital with non-life-threatening injuries, officials said. School staff and resource officers quickly broke up the fight and confiscated the knife,” reports The Washington Examiner.

At least seven people have been arrested in connection to the incident.

In 2016, the Centers for Disease Control and Prevention reported that “youth homicides and assault-related injuries result in an estimated $18.2 billion in combined medical and work loss costs.” 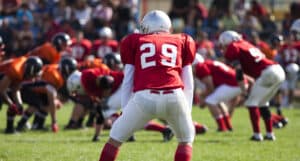 3 responses to “Two 14-Year-Olds Stabbed Outside of High School in New York, Continuing Trend of Youth Stabbings in US”