'Users That Did Not Engage In Threats Of Harm/Violence, Fraud Or Other Illegal Activity Are Being Reinstated'

Twitter’s new trust and safety head said the platform would need about a month to follow through with previously announced account amnesty.

“Our team has been carefully reviewing thousands of suspended accounts for the past month, including accounts noted in this thread,” Irwin responded to one user discussing account suspensions.

“Users that did not engage in threats of harm/ violence, fraud or other illegal activity are being reinstated. Will need ~30 days to finish reviewing.”

Thank you for the reply, Ella! We all really appreciate you and the work that’s being done at new Twitter.

Are you able to give an update for @BIPOCracism? We can DM and keep those messages private on this if that’s preferred.

Thank you for listening and working on this! https://t.co/JlcVFEtAhR

The user thanked the platform’s new head of trust and safety after further inquiring about one banned user who shared content similar to Libs of TikTok.

Irwin said the account in question was scheduled for amnesty review “in the next few days.”

Seth Dillon, CEO of satirical news website the Babylon Bee, asked Irwin if the platform would address accounts that were serving intermediary “suspensions” unless the user deleted “factually accurate” tweets per instruction from Twitter.

“We started with suspensions and will work our way out to other enforcement actions from there,” replied the new head of trust and safety

“Everyone wants the issues of shadow banning [and] wrongful permanent suspensions fixed,” said Alex Lorusso, who had previously been permanently banned since April 2020. “[Elon Musk] works fast, but not everything can be done with the flip of a switch.”

“Taking out your anger for what Twitter 1.0 did on Elon while he’s actively trying to fix things is counterproductive,” Lorusso continued. “I realize Elon isn’t immune to criticism, and Twitter isn’t and never will be perfect but pointing out the obvious that shadow banning still exists and acting like he created the system that did this is unfair.”

I realize Elon isn’t immune from criticism, and Twitter isn’t and never will be perfect but pointing out the obvious that Shadowbanning still exists and acting like he created the system that did this is unfair.

Musk previously ran several polls regarding policy changes including granting general amnesty to previously banned accounts, including the account of former President Donald Trump. Both polls resulted with users in favor of the measure.

“Blue subscribers should be the only ones that can vote in policy related polls,” said the user who is a Twitter Blue subscriber. “We actually have skin in the game.” 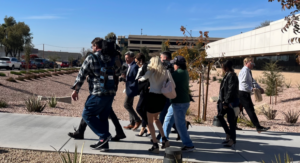