'Blue Subscribers Should Be The Only Ones That Can Vote In Policy Related Polls ... We Actually Have Skin In The Game' Said One User

Twitter polls will become exclusive for Blue subscribers, according to platform owner Elon Musk on Tuesday.

“Blue subscribers should be the only ones that can vote in policy related polls,” said one user who is a Twitter Blue subscriber. “We actually have skin in the game.”

“Good point. Twitter will make that change,” Musk responded to the user.

On Sunday, Musk ran a poll asking users if he should step down as interim CEO saying he would “abide by the results.” The poll followed pushback from an earlier Sunday policy update informing users Twitter would no longer allow “free advertising” for other platforms.

“Going forward, there will be a vote for major policy changes. My apologies. Won’t happen again,” Musk announced.

Over 57 percent of 17.5 million users agreed Musk should step down while 42.5% voted in favor of Musk remaining “Chief Twit.”

Should I step down as head of Twitter? I will abide by the results of this poll.

The tech billionaire further commented on the possibility of appointing a new CEO saying, “no one wants the job who can actually keep Twitter alive.” “There is no successor.”

Musk followed up the poll tweeting, “as the saying goes, be careful what you wish, as you might get it.”

“Hey [Elon Musk], it’s unwise to run a poll like this when you are now deep state enemy #1. They have the biggest bot army on Twitter. They have 100k ‘analysts’ with 30-40 accounts all voting against you. Let’s clean up and then run this poll again. The majority has faith in you,” said Twitter user Kim Dotcom.

The user said they hoped the poll was a “honeypot” to catch “deep state bots.”

“The dataset for this poll will contain most of them. Some good data-mining and he could kill them all in one go.”

“While some people might cry about how this is like social credit (it isn’t) it’s actually close to what the Founding Fathers intended—only landowners could vote,” noted journalist Ian Miles Cheong regarding the proposition. “It’s a good policy. Democracy must not become a tyranny of the mob.”

“Crucially, Twitter Blue works like Voter ID,” Cheong continued. “The fact of the matter is that anyone can make as many free accounts as they want and use that to influence polls unfairly for users who only voted once.”

Musk has not addressed the poll results as of Tuesday afternoon. 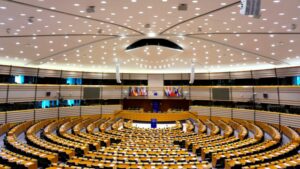