European Union nations have announced a new direct carbon tax that will impact individuals as the next phase in the continent’s race toward a zero-emission future.

Under the EU Emissions Trading System 2 (ETS2), new “polluter pays” taxes will be imposed on buildings and for transportation fuels as part of a plan to reduce Europe’s greenhouse gases by 55 percent, compared to 1990 levels, by the year 2030.

The carbon tax will impact gas, diesel, and heating fuels, like natural gas, making it more expensive for Europeans to travel and heat their homes.

The deal was reached on Dec. 18, after several days of negotiations where members warned that the new system would be “politically suicidal,” and could trigger continent-wide social unrest, according to Euractiv.

“Do not make the mistake of extending the carbon market to heating and fuel. We experienced it in France, it gave us the Yellow Vests,” Euractiv quoted French MEP Pascal Canfin in warning to Brussels last week after the EU’s landmark climate law passed.

Canfin also says that the despite the new financial burden on European citizens, ETS2 would have only a limited impact curbing carbon emissions — just three percent.

In order to reduce the price shock, EU countries are forming a Social Climate Fund (SCF) to help offset the costs to lower-income households.

“With this agreement on the Social Climate Fund, we are the closest we have ever been to ensuring that the climate transition will be fairer and more socially inclusive,” David Casa, a member of the European People’s Party (Christian Democrats) said in a statement. “In the pipeline are billions available to member states to invest in the energy needs of millions of households and small businesses. This is positive for our energy needs, for the climate, and for our citizens.”

Canfin says that even with the fund, the new plan is bad for families.

“If your budget as a household is €50 at the end of the month, you can’t wait one year to be reimbursed by a bureaucratic thing that starts at the European level, and then trickles down to the capitals,” he warned. “These households don’t have time.”

The fund will initially be financed by auctioning 50 million ETS allowances (generating roughly €4 billion). Once the ETS2 is fully implemented, ETS2 allowances will cover an additional €65 billion. Another 25 percent of the fund (roughly €17.7 billion) will be provided by member nations.

Critics of the new climate rules argue that extending carbon taxes to transportation and building sectors is a social trap that disproportionally impacts poorer households.

“This means that an individual who uses his or her petrol or diesel car will have to pay the price of the CO2 that will be on the European carbon market,” French NGO Réseau Action Climat told Euractiv back in April.

Proponents of ETS2, however, insist the new regulations will ultimately benefit all segments of European society.

“With this agreement we aim to ensure a fair energy transition for everyone. The Social Climate Fund will help vulnerable households in the energy transition, for instance with insulation vouchers or moving towards greener transport options,” Esther de Lange, of the European People’s Party (Christian Democrats), said in a press release. “For Parliament, it was important that the fund would not be a blank cheque for member states. I am very happy we managed to ensure that the money will reach the most vulnerable under the right conditions.” 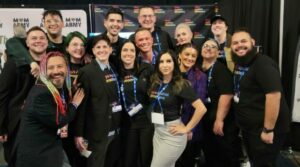 The Gays Who Strayed: Gays Against Groomers' Fight To Reclaim The LGBT Community