Twitter users have voted for Elon Musk to step down as the head of the company.

Musk had run a 12-hour poll on Saturday night, promising to “abide by the vote.”

“Should I step down as head of Twitter? I will abide by the results of this poll,” Musk tweeted.

Should I step down as head of Twitter? I will abide by the results of this poll.

Earlier in the day, Musk had been facing backlash for a new Twitter policy banning users from promoting their other social media accounts.

If you’re going to keep doing stuff like this, yes. 🤮 pic.twitter.com/cZ76VRxROo

“Going forward, there will be a vote for major policy changes. My apologies. Won’t happen again,” Musk tweeted just minutes before running the poll.

Going forward, there will be a vote for major policy changes. My apologies. Won’t happen again.

Musk continued to tweet as the poll ran, saying “as the saying goes, be careful what you wish, as you might get it.”

In response to Wall Street Silver, Musk wrote that there is no successor lined up and that “no one wants the job who can actually keep Twitter alive.” 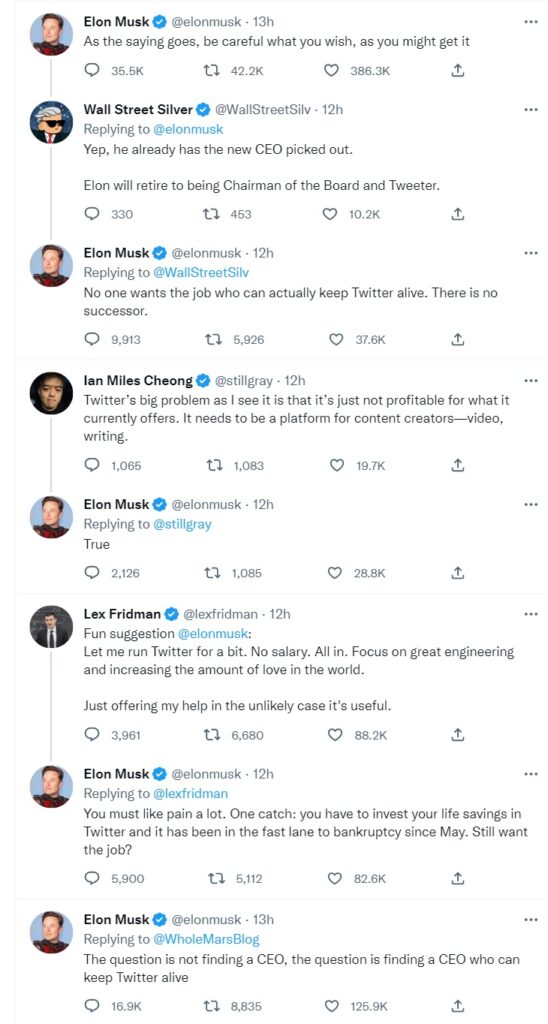 Podcaster Lex Friedman had tweeted at Musk saying, “Let me run Twitter for a bit. No salary. All in. Focus on great engineering and increasing the amount of love in the world. Just offering my help in the unlikely case it’s useful.”

In response, Musk wrote that Friedman “must like pain a lot. One catch: you have to invest your life savings in Twitter and it has been in the fast lane to bankruptcy since May. Still want the job?”

Musk has used Twitter polls to make decisions in the past, including about whether or not former President Donald Trump should be reinstated.

If Musk does resign as Twitter CEO, he will still own the platform.