The pro-abortion activist group that released the home addresses of conservative Supreme Court justices was suspended from Twitter.

Ruth Sent Us released an interactive Google map of the locations of the homes of Amy Coney Barrett, John Roberts, Samuel Alito, Brett Kavanaugh, Clarence Thomas and Neil Gorsuch following the May leak of the court’s decision to overturn Roe v. Wade.

“Our 6-3 extremist Supreme Court routinely issues rulings that hurt women, racial minorities, LGBTQ+ and immigrant rights. We must rise up to force accountability using a diversity of tactics,” the group wrote at the time.

Google disabled the map shortly after its publication.

The group also released the names of the schools Barrett’s children attend and encouraged its supporters to “voice your anger” about the repeal of federal protection on abortion at the campuses.

Ahead of Mother’s Day, Ruth Sent Us told its supporter to disrupt church services to protest the end of Roe.

“Whether you’re a  ‘Catholic for Choice,’ ex-Catholic, of other or no faith, recognize that six extremist Catholics set out to overturn Roe,” the group said on Twitter. “Stand at or in a local Catholic Church on Sun May 8. #WarOnWomen #MothersDayStrike.”

TikTok permanently banned the group on May 14 for violating its terms of services on multiple occasions. The ban was lifted two days later following a “mass appeal.”

After the court officially repealed Roe v. Wade on June 24, Ruth Sent Us led a protest at Justice Thomas’s home in Virginia, where protesting at a private residence is illegal.

The group’s website, RuthSent.Us, currently redirects to a page for an organization called Wall of Many which urges people to “peacefully protest at a local extremist church or fake abortion clinic,” to “commit civil disobedience,” and to “be ungovernable.”

According to the page, Wall of Many is “a diverse group of accomplices in the struggles of our Black and Indigenous siblings.”

“We are currently engaged in the battle of the people against a racist and misogynistic theocracy — our Supreme Court. Our focus is protests at extremist churches, the Justices’ homes, and complicit Democrats like Schumer, Pelosi, Durbin and Nadler,” the page states. 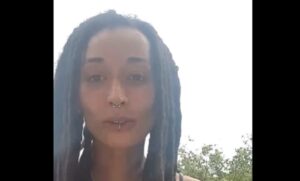