Protestors will march to the Virginia home of Justice Clarence Thomas tonight to protest the decisions released overturning federal protections on abortions.

The court released its opinion for Dobbs v. Women’s Health, which overturned the 1973 Roe v. Wade decision, on June 24. Thousands of people have gathered in the nation’s capital to either decry or celebrate the landmark news – increasing potential security threats to both the court and the nation’s nine justices.

Pro-abortion group Ruth Sent Us  will lead demonstrators on a march to Thomas’s home at 7 P.M, telling its followers on Twitter to meet at a local CVS.

Described as a “far-left group” by InfluenceWatch, Ruth Sent Us has objected to “divisive, corrupt and illegitimate Republicans,” including “Trump, his criminal family, politicians and Supreme Court justices.”

The group organized other actions against select justices following the May leak of the court’s draft Dobbs opinion. Ruth Sent Us allegedly released Justice Brett Kavanaugh’s home address, where a man plotting to kill the justice was subsequently apprehended by police. Ruth Sent Us has denied responsibility for Nicholas Roske’s plot. Additionally, the group encouraged people to demonstrate outside Justice Amy Coney Barrett’s church, home and children’s school.

Pro-abortion activists have also gathered at the homes of Chief Justice John Roberts and Justice Samuel Alito, who authored the majority opinion.

Ruth Sent Us was permanently banned from TikTok for publishing the home addresses of the six conservative justices on the court.

“Ruth Sent Us had posted videos on TikTok advertising multiple coordinated demonstrations in front of the justices’ homes in Maryland, Virginia, and Washington D.C, encouraging participants to wear costumes from Margaret Atwood’s dystopian novel, The Handmaid’s Tale,” reports National Review. “While the grassroots group had hosted marches before, the early March leak of the Supreme Court draft opinion that would overturn Roe v. Wade, the landmark ruling that legalized abortion nationally, triggered a new wave of radical activism.”

Concern for the security of the court and the justices increased in the days after the May 2 leak. Congress passed a bill increasing the security provided to the Supreme Court Justices and their families on June 14.

“Threats to the physical safety of Supreme Court Justices and their families are disgraceful, and attempts to intimidate and influence the independence of our judiciary cannot be tolerated,” Cornyn said in a statement, per NPR.

The law grants the justices and their families immediate police protection when such measures are deemed necessary by the U.S. Marshall Service.

After being unanimously passed by the Senate, the act received 396 votes in the House and was transmitted to President Joe Biden, who signed the policy into law on June 16. A total of 27 Democrats voted against the increased security.

“These groups have claimed credit for the fire bombings and attacks on women’s pregnancy centers and resource centers,” Greene said in a video announcing her bill. “These are things that should never happen in America.”

Greene described the two groups as “radical” and said that “no woman should ever feel fear to bring their child into the world.”

Justice Thomas is currently facing additional scrutiny from pro-abortion groups after he released a solo, concurrent opinion suggesting the court could reconsider major rulings, including its legalization of same-sex marriage. 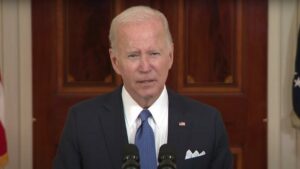 Biden Says He Cannot Use Executive Action on Abortion