The hashtag #TwitterHatesWomen was trending on Thursday after a popular black feminist poet was permanently banned for saying that “transgender rights” are “rape culture in disguise.”

Twitter said that the British poet, who goes by the name Aja, violated their rules against “hateful conduct” when she responded to a man calling her psychotic for wanting spaces for biological women only.

“This man say[s] you are psychotic if you are a disabled woman and would like a say in who gives you intimate care. This man thinks it’s ok for women to be touched without their consent. This is rape culture disguised as trans rights,” Aja wrote.

The platform said in her notice of permanent suspension that “you may not promote violence against, threaten, or harass other people on the basis of race, ethnicity, national origin, sexual orientation, gender, gender identity, religious affiliation, age, disability, or serious disease.” 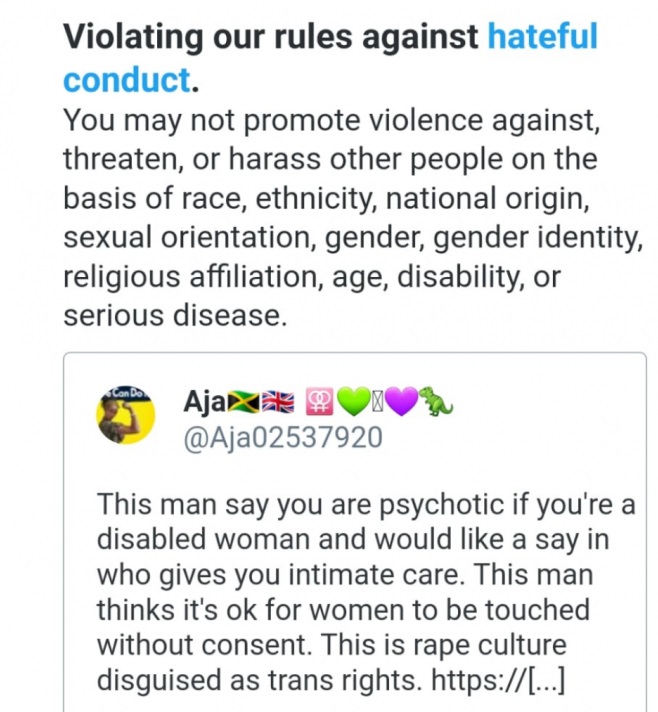 Aja had also released a poem about the gender identity movement.

“They mock us by saying they’re the most oppressed, because they put on a dress, and just want to pee next to me, and some how this is worse than our history of segregation and slavery?” Aja recites. “Do you know what I feel when I hear a white man demand compelled speech? I feel a crack of the whip on my back, I feel my ancestor’s face pushed to the ground with a white master’s boot still holding them down.”

You know what, since these requests are gonna keep coming I’m just gonna post it here, I’m sure Aja would love us still sharing it. Now properly cropped too. pic.twitter.com/JVNIUv5jQZ

“Gender ID is for the bourgeois. The elites. The ones that live such privileged lives they have to make up some strife,” the poem continues.

Aja concludes the poem by asserting, “I ain’t got no owner, and I ain’t got no crops to pick, and I ain’t got no f-cks to give. So you ain’t about to tell me sh-t about what it means to be a girl, a woman, a her, a she — those words are mine. They belong to me. I am free and I will use my speech any goddamn way I please.”

Aja also noted that the tweet she was responding to is still up.

it’s one issue though, and a really stupid one to get psychotically hung up on. You’ll be happier and might actually achieve something good for people if you switched your monomania to disability advocacy.

In a video statement provided to the Twitter account Standing For Women, Aja noted the irony of being banned for speaking about censorship.

“I’d just like to say a big, fat, thank you,” she said, for proving her point. 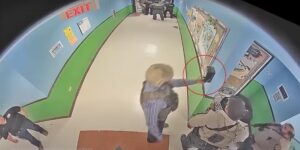