Former U.S. House Rep. Tulsi Gabbard has announced she is leaving the Democratic Party, saying the party is now driven by an “elitist cabal of warmongers driven by cowardly wokeness.”

Gabbard made the announcement in a 28-minute video posted to her YouTube channel, which covered an array of Democrat policies she says are destroying communities around America.

“Nonetheless, I can no longer remain in today’s Democratic party. It’s now under the complete control of an elitist cabal of war mongers driven by cowardly wokeness who divide us by racializing every issue and stoking anti-white racism, who actively work to undermine our God-given freedoms enshrined in our constitution and who are hostile to people of faith and spirituality, who demonize the police, who protect criminals at the expense of law,” she said.

At the age of 21, Gabbard began her political career with a run for Hawaii’s State House, wanting to have a role in protecting the environment. She says that at the time, she was inspired by Democrats who stood against the war in Vietnam and who fought for workers who had no voice and were exploited by wealthy landowners.

She registered as a Democrat believing Republicans to be the party that protected big business and warmongering elites. Today, she says the opposite is the case, citing Democrats fervently inching the U.S. toward nuclear war.

“This party is led by war mongers who are firmly in the grips of the military industrial complex and don’t know or don’t care about the cost of war,” Gabbard warned. “Who pays the price? President Biden and Democratic Party elites have pushed us to the precipice of nuclear war risking starting World War III and destroying the world as we know it.”

She added, “This is the most urgent and existential threat that we face.”

Gabbard — who served as vice chair for the Democratic National Committee (DNC) from 2013-2016 — has always been somewhat of a maverick, unafraid to buck members of her own party, and moderate enough to be a frequent guest on conservative channels like Fox News. Since leaving Congress in 2021, she has adopted more conservative positions on issues like abortion and transgenderism.

Today, Gabbard views the Democratic Party as an institution that “rejects the rule of law,” and whose policies — like defunding the police — are responsible for escalating crime in the U.S.

In her video announcement, she blasted the current federal law enforcement agencies for targeting political opponents, including concerned parents engaging their local school boards, and non-violent pro-life protestors. She also took aim at the party for trampling the First Amendment rights of Americans.

And they’re working hand in glove with corporate for-profit media and Big Tech to smear and silence political opponents and anyone who dares to challenge their authority, their narrative, and therefore exposing their insecurities.

Not too long ago, the Biden administration even tried launching their own ministry of truth with the objective of controlling what information we are allowed to read, hear, and say. They will determine what is misinformation, what is true, and what is not.

Now their ideology is one of hate and divisiveness rather than respect and love, Aloha. And they stand diametrically opposed to traditional liberalism which recognizes the basic goodness of people and the autonomy of the individual, supporting civil liberties, supporting a government of the people by the people and for the people.

Now tell me, how can a political party that is opposed to freedom be trusted with our democracy and our God-given freedoms enshrined in the Constitution? They can’t be. 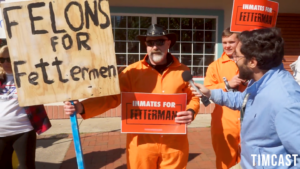